Revisiting the Wild Wild West: The Night of the Brain 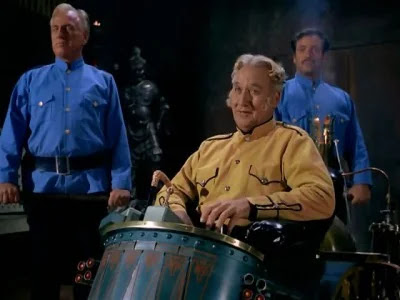 "The Night of the Brain"
Written by Calvin Clements
Directed by Lawrence Peerce
Synopsis: Jim and Artie are taunted by newspapers predicting friends' death, all part of an elaborate scheme to replace world leaders with duplicates.
Trey: Another eccentric mastermind with a plan of conquest confronts our heroes! This villain's eye concept is that he is always one step ahead. It's a clever gimmick.
The design of this episode is very Bond or very low budget bond with the primary colored nehru jackets and the underground base.
Jim: I can definitely see the James Bond influence here. However, with the chess board floor and cave tunnels, what the episode really reminds me of is the Basil Rathbone Sherlock  Holmes movie The House of Fear. 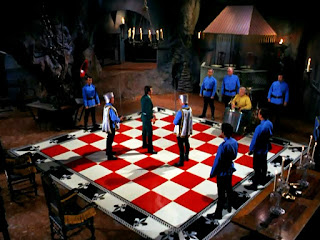 Speaking of chessboards, I liked the James West chess piece at the beginning of the episode, though it seemed a little worse for wear!
Trey: Yeah, for all the Brain's meticulousness (shooting a henchman for losing a button), his James West doll looked like he let some toddler's play with it.
Jim: The stream powered wheelchair strikes me as the sort element that gets this show associated with steampunk so often. (Though, after watching so many episodes, I don't think that association is as strong as people think.)
Trey: I agree. There are occasional steampunk details, but that's not really its thing.  This episode has a lot going for it, but for some reason it's a bit less than the sum of its parts for me. Maybe it's that so much of the episode is just Braine monologuing to West in a cave set.
Jim: That underground base is basically a damp cave. It seems out of place, aesthetically, when compared to the gold plated cane and hand made West doll. On the list of things it had going for it, I liked the fake out with Artemus and the double masks.
Trey: That's what tvtropes calls being "out-gambitted!"
Posted by Trey at 7:00 AM