Revisiting the Wild Wild West: The Night of the Colonel's Ghost 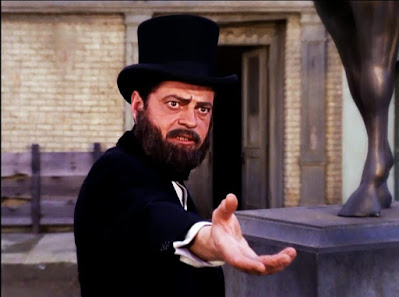 "The Night of the Surreal McCoy"
Written by Ken Kolb
Directed by Charles Rondeau
Synopsis (from IMDB): President Grant wants to go to Gibsonville to dedicate the statue of an officer under his command during the Civil War. James West travels ahead to ensure it's safe for the President. West finds Gibsonville is now a ghost town and is experiencing an "epidemic" of broken necks. The few residents left are seeking buried gold--and the number of bodies is rising.

Trey: This episode is competent, and a decent TV murder mystery (though I suspected the location of the gold from the minute I knew the townsfolk were looking for treasure), but it is middling WWW, due to the lack of a lot of the ingredients that make the show unique.
Jim: I'll agree this episode deviates from the established formula, but I really liked it. The "Whole Town Looking for  Treasure" is just the sort of classic TV trope I like to see on this show. All we need now is a "James West on Jury Duty," episode, and I'll be satisfied.
Trey: Funny you should mention that, because next week...
Jim: Really?
Trey: No. But hey, Jennifer Caine is played by Kathie Browne. She was also in the Star Trek episode "Wink of an Eye" and was the wife of Kolchak, himself, Darren McGavin. 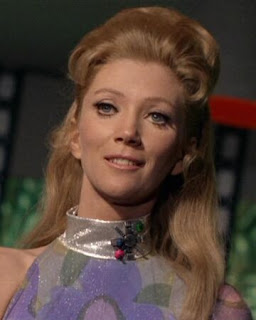 Jim: Is it me, or is Browne even more wooden than Conrad? Every line is delivered like she's balancing a spoon on her nose. There's another Star Trek alumni in the form of Lee Begere, "Colonel Gibson." He played Abraham Lincoln.
Trey: Oh, in "The Savage Curtain!" As far as Browne's performance, I will say in her defense, she isn't given much to do.
Jim: Well, true. I feel like this whole episode is reminiscent of Faulkner's "Centaur in Brass."
Trey: That story is sometimes viewed as a critique of capitalism. I certainly think you could read that into this story, as well, though I think maybe it's more about the American war machine--particularly coming as it did in the Vietnam era. Here's a fortune in gold in the form of a fake war hero made by sucking the prosperity from a town. The remaining townsfolk are searching to get this back, and never realize it's right there in front of them.
Jim: I could buy that. This is one of the rare episodes where the final freeze panel isn't from a scene inside the train car. I think that's testament to the amount of time it took for this plot to play out.
Trey: True. It ends on an unusual for the show downbeat but ending right after the climax.
Jim: I guess they didn't know how to wring any levity from this ending!
Posted by Trey at 8:21 AM