Revisiting the Wild Wild West: The Night That Terror Stalked the Town 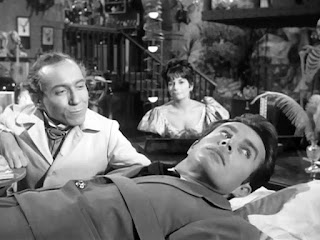 "The Night That Terror Stalked the Town"
Written by John Kneubuhl
Directed by Alvin Ganzer
Synopsis (from IMDB): Dr. Loveless imprisons Jim and surgically creates his double called a doppelganger, code-named Janus. Arte must find Jim and uncover the truth behind the warped scheme.

Trey: So here we are with the second appearance of Dr. Miguelito Loveless, 8 episodes (by airdate) after his first appearance. The episode is co-written by Loveless' creator, John Kneubuhl, and references his first appearance several times, in a nice bit of continuity. Getting us here did require skipping over "Night of the Sudden Death" where West and Gordon engage in the genuine Secret Service activity of going after counterfeiters, but realism is not what we're after!
Jim: Nope! We're again in an urban setting, like the first Loveless episode. Jim is shown smoking a cigarillo in the first scene. I don't recall him smoking any other episodes, so this seemed a bit strange. He's jumped from behind, but during the fight, he manages to retain his hold on the cigar.
Trey: He's being sized up by a mysterious woman and her companion. She puts herself in a position to to attract West's attention in bar, which leads to him getting into a carriage with her--and into a trap.
Jim: The femme fatale is Marie, played by Jean Hale who has a number of TV appearances in the 60s and 70s.
Trey: West is kidnapped by being gassed and he awakens in a somewhat surreal ghost town (rubber dummies for denizens, record players playing conversations and music). It sort of a prefigures The Prisoner (which won't show up until 1967).
Jim: Loveless and Voltaire have escaped from prison. Antoinette is also back for another chance at a song later. He's also got a new henchman, a guy named Janus. The name foreshadows future plot developments.
Trey: It practically screams them. Loveless tutors Janus to be a perfect imitation of James West, then he performs surgery to transform him into West's twin. 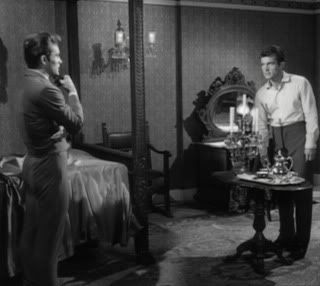 Jim: Yes, to have a new West to eventually get the explosive from the first Loveless episode, so that the good Doctor can blackmail California for his family's land back.
Trey: Loveless' training of Janus may be the most fantastic thing in this episode, though obviously the surgery is super-advanced. The Doctor has a phonograph, which won't be invented for over a decade after the likely date of this episode. The heavy use of electricity is science fictional as well, though perhaps only in the way it's portrayed on screen. This episode I think could be reasonably considered "near future" sci-fi for the 1870s--well, except Janus stuff.
Jim: As well-prepared as he is, Janus tips Gordon off pretty easy.
Trey: Yeah, these Loveless episodes so far haven't given Artemus much to do, though he does have a bigger role in this one. He rides to West's rescue.
Jim: Janus can't replicate the power of Jim West's kiss, either. When Loveless is forced to try to figure out who's who, Marie figures it out.
Trey: And she and West put one over on Loveless. While Loveless is smart, he loses by under-estimating the cunning of his opponents. Like so many super-villains, over-confidence is his undoing.
Jim: But Loveless survives to fight another day!
Posted by Trey at 7:00 AM