Revisiting the Wild Wild West: The Night of the Whirring Death 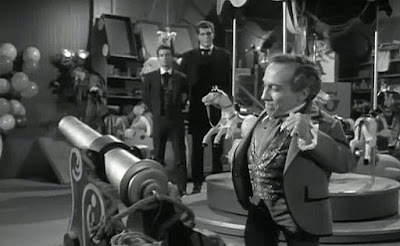 "The Night of the Whirring Death"
Written by Jackson Gillis
Directed by Mark Rydell
Synopsis (from IMDB): Jim and Artie are collect money from millionaires buying bonds to save California from bankruptcy. The problem is, Dr. Loveless is back and blowing up the would-be benefactors with booby-trapped toys to steal the money.

Trey: This is the closest WWW came to a Christmas episode. It isn't stated in the episode to be Christmas, but the winter weather, focus on toys, and other story elements give they vibe. It aired, however, in February of 1966.
Jim: It starts off with a nice tip of the hat to Charles Dickens’ A Christmas Carol with Jeremiah Ratch taking the place of  Scrooge. Ratch is played by Norman Fell, aka Mr. Roper from Three’s Company. Fell’s comedy chops come in handy as he hams it up with the Ratch character for the short time he’s on the screen.
Trey: This is Dr. Loveless' third appearance and the first not written by his creator. It sticks pretty close to the establishe Loveless schtick though: he's still trying to carve his own kingdom out of part of California. Voltaire (Richard Kiel) and Antionette (Phoebe Dorin) are back, as well.
Jim: I believe this is the one and only time Loveless is ever shown smoking. It’s mostly for comical effect, admittedly, after he's revealed as the “child” who gifted Ratch toy soldiers.
Trey: Voltaire speaks for the first time, too. It's note as being a change within the episode. One Loveless related conundrum: Why does the brilliant doctor continue to employ lovely female assistants in his plans, who he knows by now are only going to fall for West's charms? 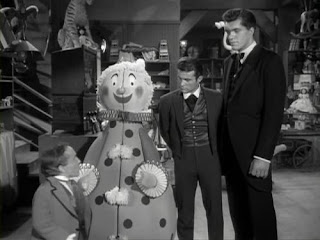 Jim: He tries to maneuver Priscilla away from it, but to no avail! She is the most wide-eyed innocent of the group, so far.
Trey: Unbelievably naive is the better descriptor! I wonder if her toy maker grandfather raised her with no contact with the outside world?
Jim: A funny bit is the look of cynical disbelief on lovely Antionette’s face when Priscilla is convinced by Loveless that the exploding toy train is a perfectly fine toy.
Just putting this out there: with the naivete Priscilla displays, I think a nice plot twist for the episode would’ve been to have her be revealed as a human sized animatronic created by Loveless.
Trey: I could buy that.
Jim: In general, I think the level of technology in this episode seems a bit advanced. We see electric trains and phonographs.
Trey: The phonograph was an anachronism noted in Loveless's first appearance. The electric train is similarly just a bit ahead, having been invented in the 1890s. Incidentally, this episode actually gives us an onscreen place and time: "San Francisco, 1874."
Jim: One of the unintentionally funny bits to me: After West is ground zero at the explosion in Ratch’s shop, Gordon proclaims that he's fine and just needs some rest. Supporting him in this dubious claim is a city cop who says, “He’s right lady. Working this beat, I’ve seen enough to know he’ll be fine.” Just how violent is this neighborhood?
Trey: Thinks are hard in California in this alternate 1874, apparently. I mean, the governor's plan here is explicitly laundering money for rich people with shady, possibly criminal, business practices to keep his state solvent.
Jim: Vote Loveless! How could it be worse?
Posted by Trey at 7:00 AM