Revisiting the Wild Wild West: The Night the Wizard Shook the Earth 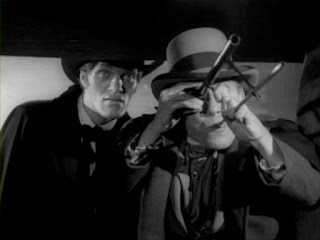 "The Night the Wizard Shook the Earth"
Written by John Kneubuhl
Directed by Bernard L. Kowalski
Synopsis (from Wikipedia): West and Gordon have their first encounter with the brilliant but evil dwarf, Dr. Miguelito Loveless, along with the doctor's two assistants, the lovely Antoinette and the mute and simple-minded giant, Voltaire. Dr. Loveless is planning to take over California from control of Governor Newton Booth, which the doctor claims rightfully belongs to him through his mother's venerable Ranchero family line.

Jim: Indeed! This episode starts on a foggy, waterfront dock which is always a good sign to me. I tend to prefer the episodes that take place in gaslit cities more than those that take place in actual western towns.
We jump right into the action with Miguelito Loveless--really more his henchman Voltaire, played by Richard Kiel--subduing a dockworker.  In the past, I’ve written my appreciation of Richard Kiel on this blog but I’ve not discussed Michael Dunn’s performance on Wild Wild West. In short, I’ve always found him to be a perfect mix of Shakespearean elocution and Broadway theatrics.
The pairing of Kiel and Dunn was only used for a couple of episodes which is a shame. Their physical extremes provided just the right tone of camp for Wild Wild West. I feel like the flavor of the show is diluted when a conventional villain is the focus.
Trey: Richard Kiel is probably best known to our readers as Jaws in the Bond films The Spy Who Loved Me (1977) and Moonraker (1979). It's ironic, because this episode, the 6th produced and the 3rd aired, is much more firmly Bondian than the 1st--and much less of a Western.
Jim: The gadget quotient is upped in a way that's Bond-like. Dunn uses an actual pea shooter with a telescopic scope to shoot a super-explosive pellet. Now that I think about it, This is a perfect example of the level of sci-fi technology the show should feature. It’s not really Steampunk, as later commentators have called it, but just a clever, ahistorical use of the items of the time.
Trey: Brisco County, Jr. would do the same thing decades later. Tech that feels like it might have existed, though it didn't.
Jim: A specially designed spy coach is presented in this episode, since the tricked out train couch isn't good for in town. Is this the only time it’s ever used? Anyway, with the ghost of Chekhov looking on, Artemus warns James that he needs to be careful of the arm rest in the coach.
Trey: That will come in handy later! So, West who has sussed out that Greta is an agent of the bad guy,  plays double agent and goes to meet with Loveless. These pretenses at West turning coat never seem to be believed by the villain, nor does West seem to expect them to be believed. It usually seems like both sides are just being polite.
West's arrival interrupts Dr. Loveless in a sparring match, where he shows he’s quite physically formidable (which is the point of this villain introduction cliche), at least when he has his cane. This doesn’t really bear out in the rest of the episode or in his other appearances, as I recall.
Jim: We get a more consistent Loveless bit soon after. Loveless sings "Bring Me A Little Water, Sylvie," while accompanied by harpsichordist, Antionette. Antionette is played by Phoebe Dorin, who had performed with Dunn in an off-Broadway show, Two by Saroyan.
Trey: They get a song every episode he appears in, or nearly. So, Loveless wants to keep the super-explosive from the hands of the U.S. government, because he wants to use it to make terrorist demands to the governor of California.
Jim: He wants to build a refuge for disadvantaged children in the “worthless” desert of California. Apparently, this land belonged to his family, which might explain some of his fortune, but it was stolen from them by the the Spanish government at some point, and then it ultimately became a U.S. state. This, coupled with his name and cultured tastes, suggest Loveless is of Spanish descent, perhaps even aristocracy.
Trey: Like many a super-villain, Loveless' morality is sort of incoherent. He has ostensibly a noble goal but horrible means, and a streak of sociopathy that makes his noble goal hard to believe.
West, of course, double-crosses Loveless and exposes the plan to the Governor of California, who doesn't believe it really (as well he might not!).
Jim: West is waylaid on his own coach by three goons, but he dispatches them using the hidden features of the coach--one of which is a spring powered ejector seat! Still, Voltaire manages to capture West.
Trey: Now we come to the deathtrap portion of our episode, but before that, Loveless shows off his invention prototypes...
Jim: TV, penicillin, the automobile and the airplane. 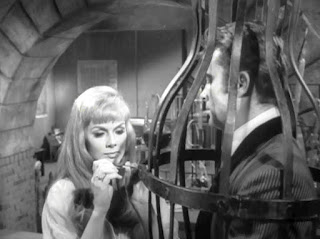 Trey: West is weirdly unimpressed with any of this. Maybe he doesn't believe it? Anyway, into a trapdoor and an automatic gibbet cage. Loveless leaves to come back and torture him later. When will these guys ever learn? With the help of a gadget and the smitten Greta, West escapes to confront Loveless in a clock tower full of explosives.
Jim: A bit of acrobatics in a clock tower allows Conrad to once again demonstrate his own formidable athletic skills. Loveless seems unafraid to be on site when the bomb in the tower is detonated.
Trey: He's a madman, I guess. He throws a tantrum like a toddler when he's defeated, though.
John Kneubuhl wrote this episode and goes on to script most of Loveless’ other appearances. I guess he knew a good idea when he found it! He wrote 8 episodes of Wild Wild West in all, though not all with Loveless. He also wrote the Star Trek episode “Bread and Circuses” although he did not receive on-screen credit for the aired  version.
Posted by Trey at 7:00 AM