So, I talked about some Good comics from 2015 and some Bad moves by comic companies.
Today I'll talk about some of the Ugly things in the comics industry and culture. 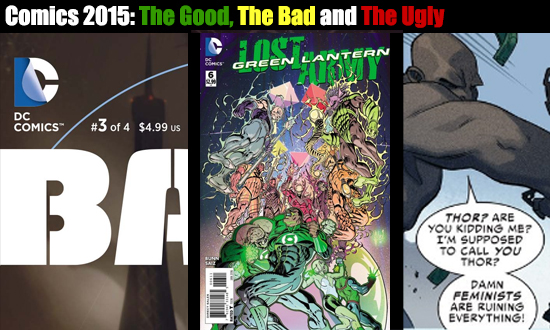 Comics are starting to cost too damn much. Back in 2014, both Marvel and DC started testing the waters for a $4.99 price point for comics. At the time, there was a good bit of push back from the fan community on this with the guys at theOutHousers.com asking fans to Say No To Five Dollar Comics.

And while it seems we avoided the $4.99 weekly comic at the comic shops for the most part, DC did move to $4.99 on the newsstand. Also, I still see both Marvel and DC using that price point on comics they know are going to be big sellers (Vader Down, Old Man Logan, Batman Europa, ect...)

Check out this list of top sellers from November 2015. Look how many of them are $4.99 or more. (Numbers from www.comichron.com )


Note: November was a bit harsher than most preceding months with 10 out of 20 comics priced more than $3.99. September and October only had 4 and 5 comics in this range. However, December was second highest (8 out of 20) which makes me wonder if we aren't seeing an edging up by both companies. If both companies continue down this road, I think it's going to cause many fans to just feel like they can't afford the hobby anymore. Heck, DC may have already have done that with their weekly and soon bi-weekly publishing strategies.

And while the specter of $4.99 comics may never emerge as a real threat to the industry, it's possible that $3.99 comics have already taken their toll. Personally speaking, I know that I'm very hard pressed to buy a comic that's priced at $3.99. Comics at the $2.99 price range seem to be getting rarer and rarer (especially among independent publishers which I find myself increasing drawn to.) There are some exceptions and Comixology is good about having sales on older titles, but my weekly purchases have definitely dropped dramatically over the years.

How about you?
Are you buying as many comics as you were a year ago?

Pulling the plug on new series seems to be a trend that's gaining appalling speed among the big two. The recent quick cancellations among the DC You line wasn't just alarming, but embarrassing. Some of the series that might have caught on with a little more time and promotion were killed after just a few issues. Now, several months later, Marvel seems to be doing the same thing with many of the All New, All Different books as Bleeding Cool reports that listings on Amazon suggest that Marvel is cancelling some of the new series after just half a dozen issues.

As a fan of older comics, I think of all the old D and C-list comics that lasted more than a year and it's just sort of mind boggling how fast comics get cancelled these days. The days when an artist or writer could work for years on a title like DC Presents or Fantastic Four are just gone. That's gotta make making a living as a comics professional (among the big two) a hell of a lot tougher now.

Okay, confession time. Many years ago, Chris Sims wrote a well reasoned article on what he termed as Regressive Storytelling at DC and the negative effects it was having on diversity within the DC universe. The gist of the article was pretty simple. As DC catered to older fans (and writers) desire to see Silver/Bronze Age alias of characters like Atom or Firestorm restored in comics, they were unfortunately replacing the more culturally diverse current versions of the characters.


At the time (2010), I was one of those fans who was happy to see characters like Barry Allen and Ray Palmer return, so I wasn't entirely on board with Chris' stance (though I fully recognized he had a point.)

Fast forward a  year later and DC presents a Green Lantern movie with Hal Jordan instead of John Stewart. That's when the the real problem struck home for me. Considering that John Stewart's appearances in the Justice League cartoon series most likely made him the more recognizable among kids at the time, I thought The Green Lantern movie would have been the perfect time for DC to step up to the plate with a non-white hero. When it was decided to go with Hal Jordan instead of John Stewart, I was very disappointed. Since then, I've been a lot more sensitive to the need for comics and comic book movies to embrace diversity.

Now, as comics are starting to make strides toward better diversification, I see a lot of fans throwing stones at what they perceive as Social Justice Warriors. Some of these attacks against progress come under the guise of concern like this article from WhatCulture.com:

There’s nothing wrong with Captain America being black of course, but why isn’t making The Falcon a character who can carry his own series in the role he’s best known for a priority? The mantle of Thor being passed to a woman has actually made for a great tale, but the reveal again shows an unnecessary reliance on focusing more on recognisable brands than characters. ~WhatCulture.com

This view point is parodied in an issue of Thor with the Absorbing Man:

Other protests are often more juvenile, sexist or racist in nature. This year, with its Lady Thor and Falcon Cap seemed to lead to a lot more of the protests than I've seen in previous years. When I compare that to the refreshing influx of new readers we are seeing with comics like Batgirl, it's a bit depressing. 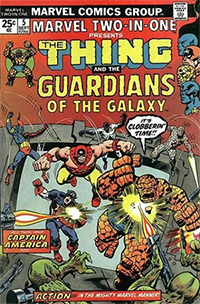 Still, as older fan, it's hard not to get upset when we see characters we remember change. As a guy who remembers the old Guardians of the Galaxy, I wasn't happy with how the lineup of characters changed from my ancient Bronze Age memories. However, once I made my peace with it, I was able to enjoy the movie quite a bit. It's not like the old comics don't exist anymore.

So while I still may have an Old Man Comics knee-jerk reaction to some changes, I find if I keep an open mind, my old memories and new experiences can easily coexist.

And that keeps the hobby fun for me.

Nowadays there are new and interesting series of comics are available in market that i enjoy when i don't have buy research paper work and you i want others to watch it if they are looking for more interesting comics that they never saw before.