Last week, I talked about some good comics I enjoyed during 2015. Today, I'm going to talk about some bad things from 2015. This is going to be less about specific comics and more about general industry trends and happenstance. 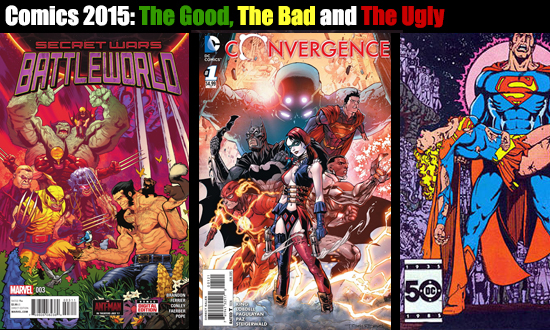 The Secret Wars/Convergence Spin Offs - Back in June, I talked a little about these two events. While the dismal sales of DC's Convergence event were discovered pretty quickly, the failure of the Secret Wars tie ins took more time to register.  I believe part of the problem was Marvel tried too hard to integrate tie ins into the main event. There were a lot of titles under this umbrella with 3 branches that a title could fall into: Last Days, Warzones and Battleworld, 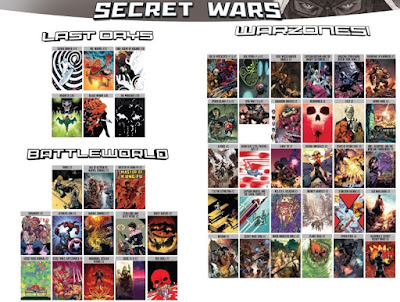 Reflect on that for a second. Let's say you're a lapsed comic reader who remembers the classic Secret Wars event, and you've heard about this new Secret Wars. So you walk into the comics stores to check out what's going on. Waiting for you is a wall of titles like: Battleworld: Ghost Racers or Warzones: MODOK: Assassin. Are you really enticed by the Secret Wars subtitle banner preceding the title's name? Or is it just more marketing strata you have to dig through to decide if a book is for you or not? While it's hard to gauge the effectiveness of subtitles here without a control group, the sales data isn't good: the number of Marvel titles in the Top 100 decreased by 13% during this period.

If the goal was to get readers to buy more comics than they had bought when Marvel was just publishing their regular lineup, then that part of the Secret Wars event failed. This was doubly unfortunate as a lot of these titles were going to be later spun off into the All New All Different relaunch. As you might expect, many of those titles are now struggling after just two or three issues with several of the new titles (Web Warriors, Spider-Woman, Squadron Supreme, ect...) already clocking in at or below the 30K mark by issue 2.

Also bad in 2015: No Supergirl Synergy - The complete lack of a Supergirl series or collection to capitalize on the television show. Both my daughter and wife enjoy the new Supergirl series, so this Christmas, I thought I  might try to find a nice collection of Supergirl stories for them. You would think with the new wave of 75th and 50th Anniversary collections DC is putting out, there might be something similar featuring Supergirl.

Nope.
Well, that's sort of understandable because her first appearance was 1959, which doesn't really lend itself to a nice anniversary number (though there are ways to fudge these things...)

How about an Earth One hardcover featuring Supergirl?

Nope.
For whatever reason, the Earth One collections come out slower than Game of Thrones novels. As it is, the only heroes covered by the Earth One line so far are Batman, Superman and Teen Titans. Grant Morrison's Wonder Woman is due later this year. A Supergirl Earth One graphic novel is no where on the map.

How about a cool hardcover collection of classic Silver Age/Bronze Age Supergirl stories?

Nope. The only thing close to this is the DC Presents collection of Silver Age stories in black and white.

As it stands now, the best Supergirl collections available on Amazon are the Peter David stories (which come with a lot of post-Crisis baggage) or the New-52 Supergirl trades (which have baggage of a different sort.)

We won't see anything like a real Supergirl Omnibus until June 2016 according to Amazon.

Here's the most puzzling thing about all this: Look at the DC You publishing initiative. It was by all accounts inspired by the success of the new Batgirl comic, right? So, if you were a publisher, trying to duplicate said success AND you had a major television series featuring a female hero coming out in the Fall, wouldn't it behoove you to include that character as part of your DC You initiative?

Next week, I'll look at what I consider the Ugly things from 2015.

I didn't pick up any of the Secret War titles. Those sort of 'event' comics just turn me off big-time now. Probably more people view such things as jumping-off points, rather than jumping-on.

@Kid - Yes. I've seen quite a number of posts on messageboards that support that idea.

All of these comics are on the top nowadays and people taking interest in these comics series. I like to watch it when i don't have research paper writing service work and this page is very beneficent for every comics lover.