10 Things About the Daredevil Trailer

Recently, Jim asked me to kibitz with him about the state of DC Comics.  If you caught that post, you may have noticed we share a common fondness for the bygone days of comics and a keen curiosity about their future, both as a medium and as a business.  We both grew up surrounded by comics, got liberal arts degrees, then swerved into careers on the World Wide Web.  We met when I worked in comics retail and Jim was transitioning from early adopter of digital comics to wild-eyed prophet.  It's an honor to be Jim's guest here, and I hope you'll indulge me as we look backward and forward together, talking about everything from back issues to digital formats, databases to nostalgia.

Unless you're living in the bombed-out wreckage of a Blockbuster Video, I imagine you've seen the teaser trailer for Marvel's Daredevil series, coming to Netflix April 10.  Let's take a closer look and count down its virtues and vices, Flashback-style.

1. Catholicism is front and center.  The first thing Netflix tells us about this Matt Murdock is his religion, and it reveals more of the series' backdrop than that tired old shorthand "Catholic guilt."  Murdock's unease is no hand-wringing nag of conscience but the existential burden of the human condition: Try as he might to stay out of trouble, he finds himself morally compelled to act.  Daredevil is damned if he does and damned if he doesn't, steeped in a fatalism that strikingly complements that of Netflix's flagship shows, House of Cards and Orange Is the New Black.

2. And yet — no devil suit.  Sure, he'll have the iconic suit (or some version thereof) at some point in the series, but to leave it out of a trailer steeped in Catholic trappings is to miss an opportunity to demonstrate what makes Daredevil tick.  At his core, Daredevil is a mass — sorry; litany? — of contradictions:  A would-be good Christian who dresses as the devil to uphold his morals, a lawyer who breaks the law to uphold it, a man who abhors violence yet excels in it.  Excluding the secular icon that is DD's super-hero suit, the religious iconography of the trailer feels orphaned, perhaps even squandered.  I can't help thinking of an early trailer for 24 that failed to explain the real-time/24-hour conceit of the show.  Super-heroes aren't the only ones known for wearing red longjohns, and a trailer with no hint of horns is a Garden of Eden without a serpent.

3. Then again, this is only the first teaser trailer.  Maybe there's a reason to hold off on the suit.  There should be at least one more trailer before April 10, and the vast majority of the public, who don't set Google alerts for "Daredevil+Netflix" and pore over spy photos from movie sets will be encountering Netflix Daredevil for the first time in this trailer.  Leading with the devil duds may give cousin Norma a distorted view of Daredevil, maybe even leading her to write it off as "a super-hero show" (whatever that means these days).  So saving them for a second-trailer reveal could be smart marketing and smart storytelling — lop-sided iconography be damned.

4. No lawyerin'.  Not one shot of a courtroom?  Cousin Norma is going to have no idea what Matt Murdock does for a living!  The law is more than a colorful backdrop for Daredevil's office antics.  It's the rock on which Daredevil is built:  Street crime threatens it; failure to keep it (in the religious sense) is the source of all that delicious Catholic tension.  Just as there's no Fall without a paradise, there's no Daredevil without the law.  Focusing with such intensity on faith and crime in the trailer but not even mentioning the law is surely an oversight.  Plus, as Jim points out, audiences love a courtroom drama.  They loved James Spader as Alan Shore on Boston Legal, and they love him as Red Reddington on The Blacklist.  In Daredevil, Netflix is giving audiences both Spaders at once.  How is Papa 'Flix not exploiting that?

5. This masterful bit of mise en scène.  Two differently-shaped canvases on a wall evoke the panels and gutters of a comic book.  The canvases sport two tones, left to right, suggestive of old, yellowed newsprint and modern slick printing.  A lone figured framed against the larger canvas occupies it like a character in a comic book panel, except he stands in relief to the "panel," undeniably three-dimensional.  3-D as the camera gives us maybe the widest array of colors it will offer in this trailer.  Though it's a limited palette, it's subdued and stands in contrast to the four CMYK colors of the traditional comics page.  This is a beautiful, evocative image that almost works as a thesis for adapting comics to the screen. 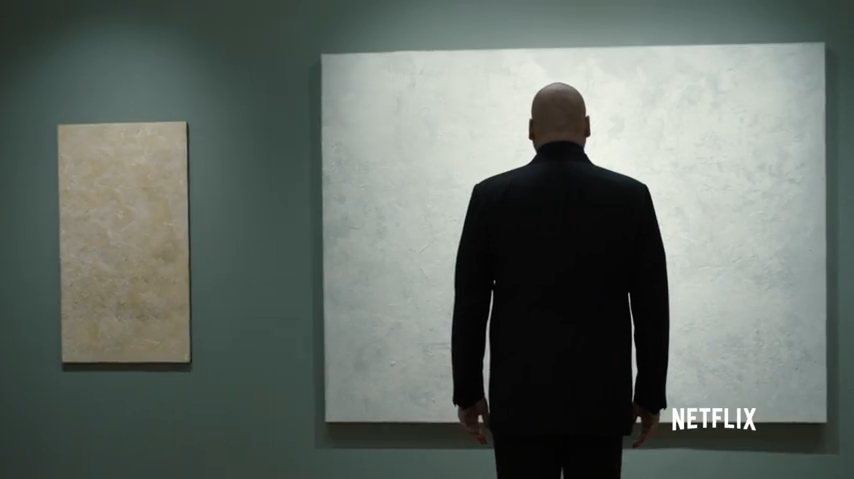 6. Despite that, for a teaser trailer, it's light on the visuals.  Teasers are usually sumptuous, or at least visually punchy.  This one's dark and perfunctory, anything but flashy.  Given Daredevil's comic-book roots, I expected a trailer built on sweeping imagery rather than story-specific set-up beats.  But then, the first trailers for House of Cards were visually pedestrian, too, relying on Kevin Spacey as their single special effect.  Marco Polo's initial trailer was highly visual, though, seducing the eye rather than the ear.  Here, Netflix goes for the House of Cards approach.  Daredevil being blind, there's a fair point in aiming the trailer at senses other than sight.  That would be smart, but I doubt it's the intent here.

7. Because the trailer doesn't evoke the other senses particularly well.  The audio and visuals are slightly out of sync, creating a sense of disorientation and even obfuscating bits of the introduction of Matt Murdock.  Can cousin Norma, who's being introduced to Matt Murdock here, tell he's blind from watching the trailer?  We have the shot of him walking up the aisle toward the sanctuary, clacking his cane — but the cut to the confessional is quick, and it's easy to miss the half-second establishing shot that confirms the man with the cane is the man speaking to the priest.  If there are aesthetic benefits to the fuzzy-edged and/or dark shots, the too-quick cuts, the lack of establishing shots, and the crowded soundtrack, those are outweighed by the impact all this disorientation has on clarity.

8. The snippets of incidental dialogue that crowd out Matt's monologue, however, are well choreographed.  They reveal character and subtly shade our expectations.  "You think this is still about you," for example, indicates the arrogance it takes to don a mask and set about solving your neighbors' problems with violence, regardless of to whom the line is actually addressed in the episode.

9. The music is underwhelming.  Last year's Guardians of the Galaxy went unapologetically kitschy for its soundtrack, but to date that's the sole exception to Marvel Studios' penchant for low-key soundtracks that keep their heads down and try not to call attention to themselves.  The incidental music (or maybe it's just sound design?) we hear in the Daredevil trailer is typically restrained.  I don't know that Daredevil calls for a flamboyant sonic identity, and I doubt Netflix aims to discover or create the next Wes Anderson (who builds elaborate, immersive musical worlds for his films).  But I do look forward to the next Marvel Cinematic Universe outing that has a little spring in its step.

10. Cuff links.  Daredevil is going to put cuff links on the map.  Stop rolling up your sleeves now. 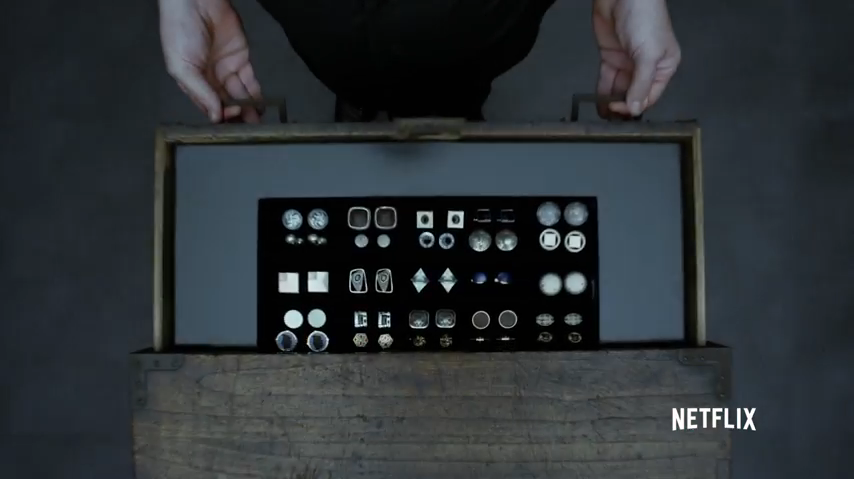