This week Blair gives us his opinion on the recent news that DC is making some pretty drastic editorial changes in June. Some of these changes sound pretty good, but as Blair explains, some could be better. - Jim 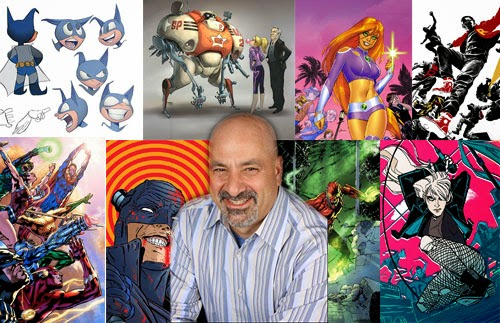 Last week, DC Comics made a surprise announcement regarding their plans after the Convergence crossover event. And to hear DC tell it, the era of The New 52 is over. According to DC Co-Publisher Dan DiDio,

“in this new era of storytelling, story will trump continuity as we continue to empower creators to tell the best stories in the industry.”

“Story will trump continuity.” What does that even mean? Does that imply that writers now have a greenlight to trample over other stories as they see fit? We kind of already had that at DC and at Marvel. Even within some of the biggest crossovers at both companies, consistency of story and character can be pretty non-existent.

The ability to ignore continuity is something that comic creators have begged for in the past... not that it ever stopped them before. And I won’t shed any tears over the loss of the New 52... especially since it’s not actually going anywhere. DC later put out a statement that clarified that the 2011 reboot continuity is still in effect.

The bigger question is whether DC’s newest shake up can lure back lapsed readers and regain some of the sales momentum from the early days of The New 52. For me personally, I don’t think it’s enough. I see a lot of buzzwords in the announcement like “inclusive,” "contemporary," and "accessible;" which in theory sound like good ideas. But in execution?

Bleeding Cool’s Rich Johnston has characterized DC’s latest moves as a response to the success of the Batgirl of Burnside creative reboot by Cameron Stewart, Brenden Fletcher, Babs Tarr. To be sure, that book has been a success story for DC that brought renewed interest to Batgirl and Tarr’s artwork has been very pleasing to look at. 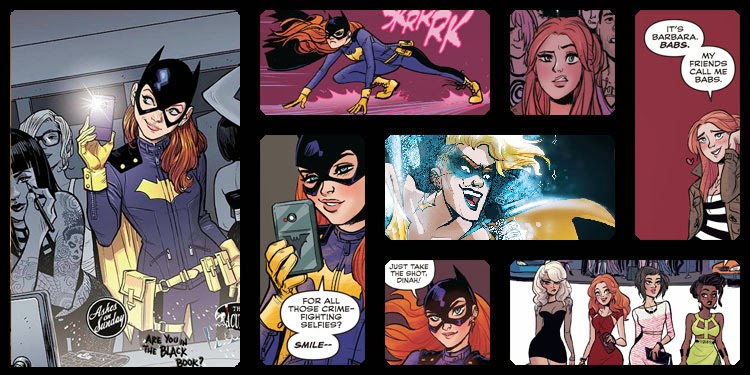 But as a template for the DC Universe, I don’t think that this Batgirl title should be the guiding light. I really wanted this to be something that I could get behind, but the title character as written by Stewart and Fletcher doesn’t seem like Barbara Gordon to me. Under their pen, she’s kind of a ditz, and she’s a lot less competent than she used to be. I understand that imperfect characters are more interesting than perfect heroes, but Barbara Gordon has lost a lot of the defining characteristics that made her so likable to me in exchange for character traits designed to make her seem younger and more hipster.

I’ll give Geoff Johns this: at least his recent Superman run felt like a Superman story that could have been at home in almost any era. 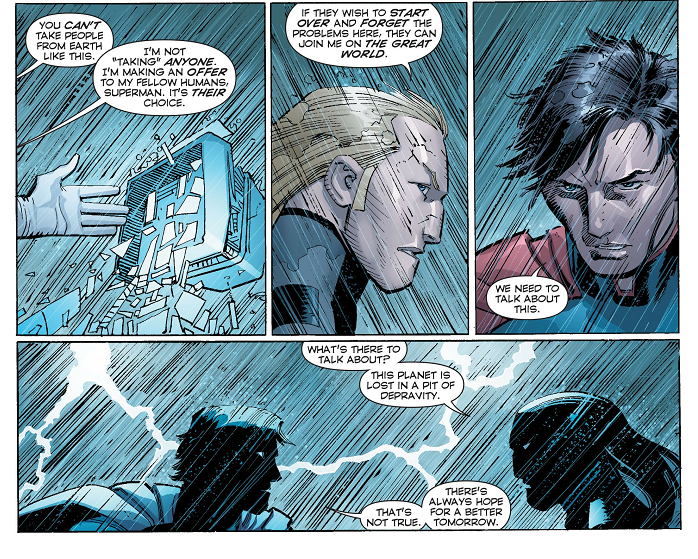 His Clark Kent and Superman had an innate consistency with the core of his character that the new Barbara Gordon lacks. It’s not like we have this problem with Batman. He was one of the few characters to enter The New 52 largely unchanged, and Scott Snyder has been a very solid writer on that book.

As much as I’d like to see the DC Universe I grew up with make a full time comeback, I know that’s never going to happen. You won’t see Wally West as a full grown married man with superpowered children outside of Convergence. James Gordon isn’t getting his white hair back any time soon and the only Justice Society sticking around will be the Ultimates-lite version hanging around on Earth 2, not the originals from WW II.

I miss that pre-Flashpoint world. But I’m not so desperate to get it back that I’ll buy anything with the characters that I loved just because it’s in front of me.

There are some encouraging things in DC’s announcement. I think that having Bryan Hitch back for a second run on Justice League of America could be a lot of fun... depending upon how well he can write. One of DC’s tactics to lure the big name artists appears to have been offering them the chance to write their own titles. That’s one of the reasons that David and Meredith Finch are co-writing Wonder Woman.

But I still have to wonder how committed DC is to this current course of action. This feels less like a fresh start and more like one of Marvel’s annual “let’s relaunch everything!” initiatives.

Believe it or not, I’d actually like to see DC succeed in bringing in new readers and new audiences. I just want to be able to enjoy the comics with them, rather than see some of my favorite characters twisted and contorted into something that I no longer recognize.

I still would not put it past this editorial regime to trot these older versions out just long enough to drag them through the mud. Look at what they did before N52? If they did bring it back tomorrow would we want it back the way Didio and co. left it?


Speaking of good ol' DizzyD, here's another soundbite: "Whether you've been a DC fan your whole life, or whether you are new to comics - there will be a book for you beginning in June."

I don't see how. N52 isn't actually ending, it's just another round of no.1's near as I can tell. I think all it amounts to is dropping that "The New 52" logo from the corner.

I've decided to look for the Convergence issues that might be of interest to my Golden Age palate, in the quarter bins of future mom and pop shows. 52 allowed me to get used to ignoring DC for the most part other than the occasional Morrison jaunt.