Superman is arguably the most recognizable superhero in the world. However the popularity of his rogues gallery pales when compared to the villains of Batman, Spider-man and The Flash.

The problem is there just isn't a lot of depth on the bench as they say in football. If you ask most Superman fans to name a Top 10 Superman villains, I bet you won't get past seven before The Toyman makes the list. 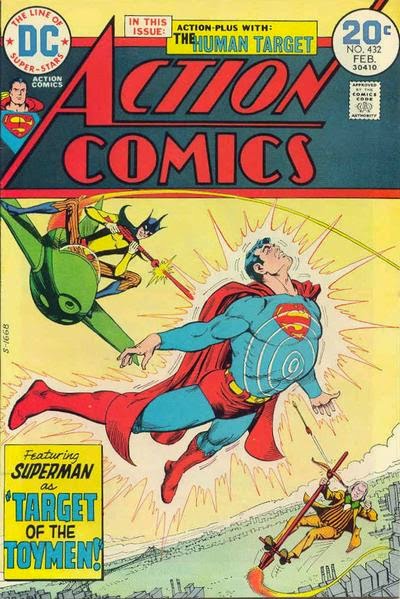 Even when you step forward into the modern era when the value of a good rogues gallery has been recognized, things don't get much better. Check out this cover of Superman's villains: 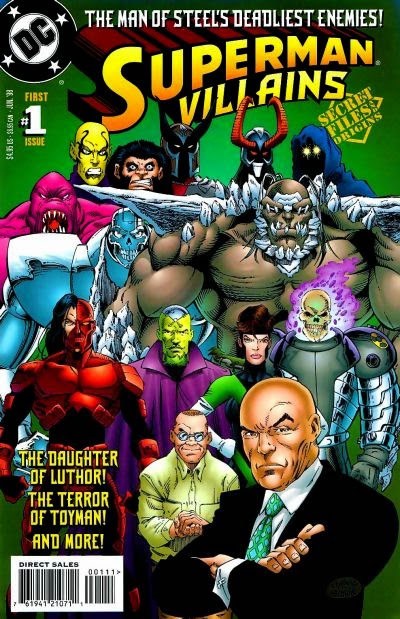 Who the heck are half of those guys? Seriously, that back row is made of Kalibak, a yellow guy and THREE guys whose faces are hidden. It's like some sort of meta statement on the generic nature of Superman villains.

Oh, and Toy Man get's a second billing after Luthor's Daughter (a character who probably doesn't exist in the DC 52)

I'm going to examine why I think the Superman Rogues is so sucky this week, but before I get into it, I thought I'd introduce the concept in a separate post so people who disagree can get it out of their system early.

I think your pretty much right (Luthor and Brainaic being the only classics in the list), but I don't think he's the only one with an uninspiring rogue's gallery. Really, it's moire the rule than the exception. Beyond Spider-Man and Batman, most characters only have 1 or 2, and sometimes not that. Flash is odd because his have become iconic (to fans, not to the wider public) as a group not individuals.

What is his rouges gallery guilty of? Not being Batman or Spidey's?

Metallo,Parasite,Mongul,Bizzaro,Doomsday (the Death/Return story has problems but Superman fighting a monster is still a cool idea)
Darkseid (A New Gods villain, not a Superman villain technically but pitting these two against each other just seems to work.),Phantom Zone villains (Smallville had an interesting tweak to this that allowed more villains.),Brainiac,
Luthor.

..and yes, there are lame ones like Toyman and Prankster but while Toyman couldn't carry a movie he can be great as a re-occuring episodic villain that isn't necessarily another would-be world beater.

Same goes for Mxyzptlk who is good for a comedy episode while also posing a pretty powerful threat in the sense that Superman cannot punch his way out of a bout with Mxy.

Then there's Livewire, Atomic Skull, Silver Banshee, I also liked Rampage but might be alone on that one.

@Trey - Good point. It might worth considering an article on which heroes do have notable rogues galleys. As to Flash rogues - I suspect the fact that there were numerous stories where the rogues teamed up in one way or another might be the reason they became iconic (as a group.) Individually, some of them are every bit as bad as The Toyman

@MattComix - Good job on listing out a respectable lineup. I'm inclined to discount Darkseid (as he more of a villain at large and really didn't become a Superman nemesis until the cartoons. Same with Mongul who was suggested in another readers list via email) But if I swap Cyborg Superman for Darkseid, your list looks pretty solid.

Still, Livewire, Atomic Skull, Silver Banshee, Rampage (and Maxima as someone else suggested) don't really have high enough profile. They could be HIGHER, but the key is visibility, and I don't know how many of those guys made it into the New 52 universe.

You mentioned carrying a movie as a criteria, and I think that's a good thing to think about. If we get more Man of Steel sequels, it would be nice to see some of the guys you listed in the movies. So far in the movies, Superman's villains have consisted of:
Zod
Luthor
Richard Pryor
The Nuclear Man

I would love to see a high tech version of Metallo or a truly scary Bizzaro.

I can wait on Doomsday, though I bet we see him sooner than the other two I just listed.

@Jim. Man I've been waiting for Brainiac to be in a movie since being a kid watching the closing credits of Superman II in the movie theater. It boggles my mind that it's 2014 and it not only still hasn't even been attempted. (I always thought the chrome skeleton version from the 80's would look great on film). I think the movies weird reliance on Luthor and Zod kind of feeds the negative perception of Superman's rouges gallery.

I'm with you on high-tech Metallo. Honestly for a truly scary Bizzaro you might want to check out Smallville's version. Myself I kinda lean towards a more sympathetic version like the one from the DCAU.

Cyborg Superman probably counts, I just tend not to nominate him because his origin is tied up in a really stupid riff on the Fantastic Four and nobody who wasn't reading the monthly titles regularly in the early 90's knows who the hell Hank Henshaw is so it made the reveal of his identity in Return fall kinda flat.