The Demon vs The Phantom Stranger 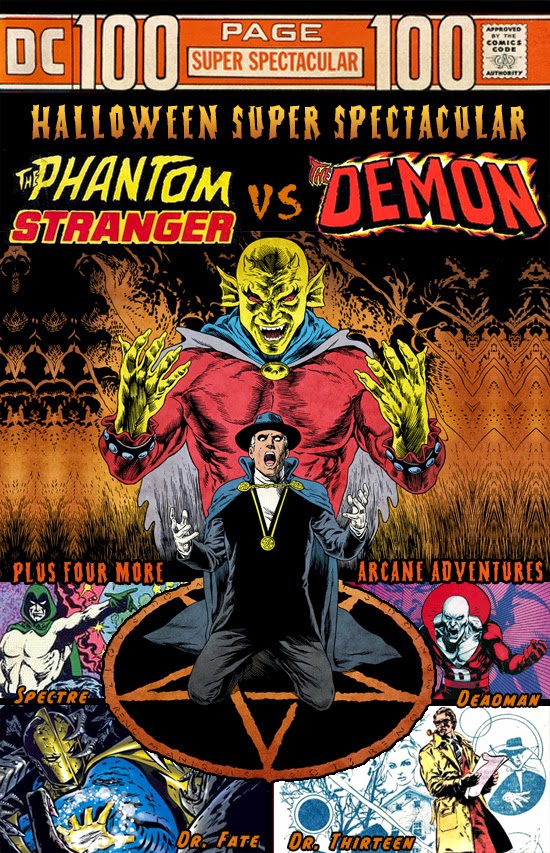 The art for this cover was designed and created by FBU Goto Artist Reno Maniquis, who came up with the interesting notion of Etrigan trapping the Phantom Stranger in a pentagram (which strikes me as something that might actually work given that the Stranger is often alluded to as being a fallen angel of some sort.)

Here is the original artwork without my 100 Pager embellishments: 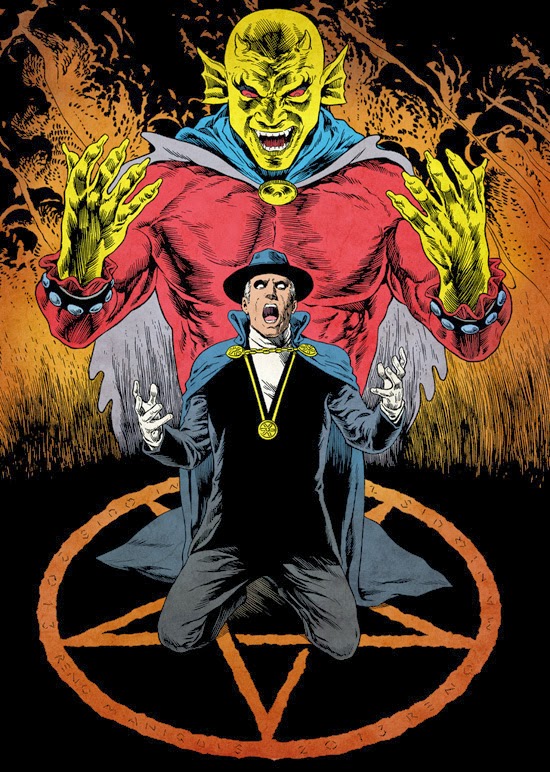 As I was working on this cover, I thought about how many times DC has presented the Demon in a regular title. As a refresher, here's what I recalled: 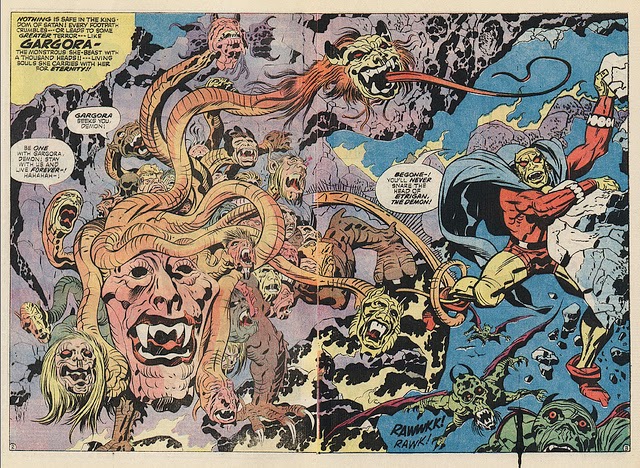 Sadly, Kirby's run didn't last nearly long enough. After Kirby left DC to go back to Marvel, the character would languish only appearing in a few Brave and the Bolds (which is where I discovered him.)

His next solo series - which I was eagerly waiting for upon first hearing about in the mid 80's was with rising star Matt Wagner, creator of Mage, an independent series I had enjoyed. 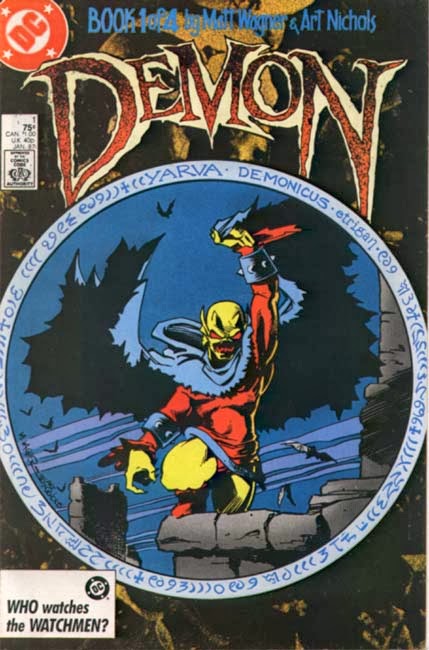 I had high hopes for this series, but was greatly disappointed by it at the time. To be honest, I don't remember much about it (I have a vague memory of the Etrigan and Jason Blood being separated, which is always a mistake) but other than that, no details stand out. I should check it out again to see if it was really as bad as I my younger self thought.

From there, the character would make a few cameos in some 80's comics with his most notable being in Alan Moore's Swamp Thing run. It would be awhile (1990) before he got another run in a full blown series - this time written by Alan Grant and pencilled by Val Semeiks. 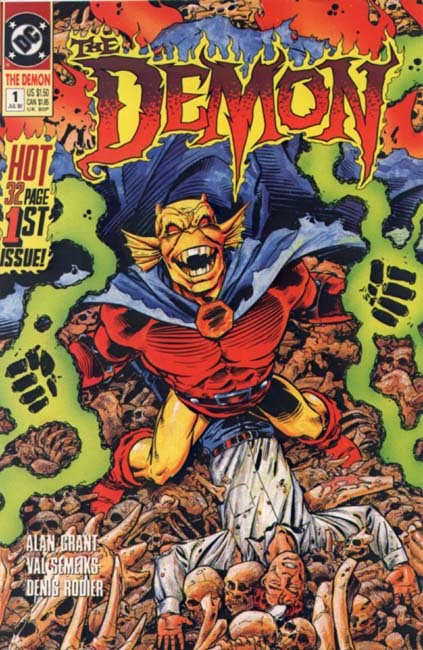 I tried a few issues from this run, but it never really struck a chord with me. It may have been a bit too jokey for my tastes (perhaps emulating the jovial tone of Giffen's Justice League?) On the other hand, I've seen it convincingly argued that this version of the Demon is this most definitive (outside of the Kirby run) and my tastes in comics and art have changed quite a bit in the last 20 years, so it's possible I would enjoy the series more now. I will probably round up the first 12 issues and give it another go.

Next up is another near miss I'm afraid (based on the short length of the run) when John Byrne took a shot at the character. 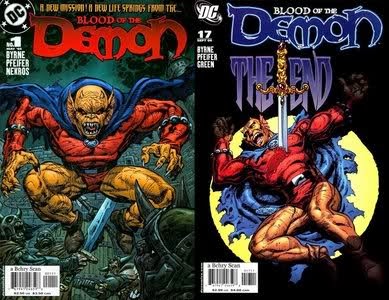 This run wasn't bad (as most Byrne stuff tends to be pretty solid) but the title didn't really ignite with modern readers, most of which were only familiar with Byrne as that crazy guy who is always getting his rather incendiary message board post reported on Bleeding Cool.

The last entry in the list presented a non-rhyming Etrigan who was mostly Demon In Name Only. Paul Cornell's Demon Knights. 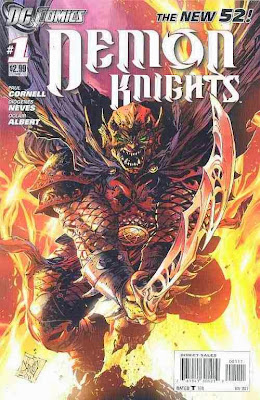 The premise of this series really had me excited but the overly large cast of characters (none of which really seemed to actually IN character) grew wearisome. The series felt a bit like it was a story Cornell had dreamed up with other characters and he was shoe horning elements of the DC universe into it to fulfill his monthly obligations.

Which brings us to now? With so many incarnations of the Demon having come before (and only the 90's version lasting very long) one has to wonder what will the next one be like? And how long will it last?

Only time will tell.

My intro to Etrigan was the Matt Wagner series, and I liked it, but it wasn't enough to make me follow the Demon's adventures. The next Demon series I bought was Byrne's, but that was mostly for the art. It was okay, but sometimes the plot would veer off and resolutions sometimes came too quickly. I thonk the Alan Grant run was the longest-running one, right?

The Wagner series was basically my intro to the Demon (maybe a team-up aside), so I enjoyed it, but it is a different sort of portrayal than Kirby's run or Grant's.

This article is mind blowing. When I read this article, I enjoyed.

I want this book to exist so very much!!!! This makes me really annoyed at DC more so for the 52 junk. Ah well...

Heyo. I'm the guy that writes WTF, DC? and I'm delighted I convinced you Grant's version was the definitive version rather than me being nostalgic for my youth. There was a sense of humor and a feeling of deft, economical storytelling to Grant's take that just wasn't present on any version pre- or post-early '90s. If they could collect those first two dozen or so issues into trades...well, I don't think Demon fans would need much else.