Of late, I've been listening to various comic podcasters recount the moribund details of Avengers vs X-men. Chief among the things I've found myself dismayed by is the rather frivilous manner that the Sub-Mariner has been used in the series.

I've always had a soft spot for that character. He and Captain America are pretty much the lone counterparts to DC's JSA. (There have been a few other characters brought forth from the Golden Age, but none have ever been given the same spotlight that Cap or Namor have been.)

While Captain America has had more or less a steady career at Marvel, the Sub-Mariner has had a tougher time keeping his B-List status. I thought today I would present a visual time line of the Prince of Atlantis publishing history.

During this time Namor appeared in three Timely comics: Marvel Comics (which later became Marvel Mystery Comics), his own comic and All Winners Comics. (Thanks to Britt Reid for the correction!) 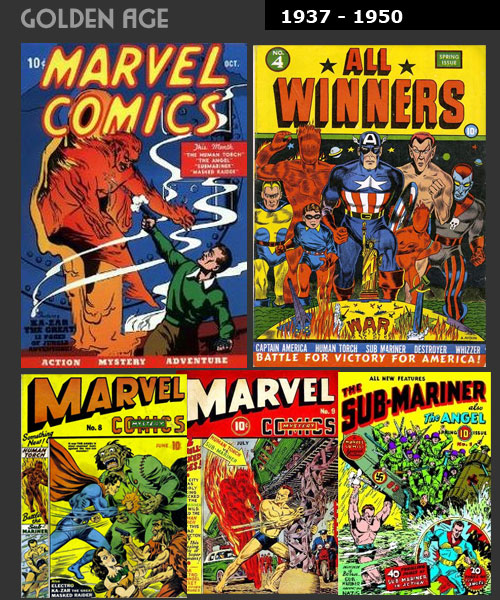 Namor first appeared in April 1939 in the prototype for a planned giveaway comic titled Motion Picture Funnies Weekly, produced by the comic book packager Funnies Inc. The only eight known samples among those created to send to theater owners were discovered in the estate of the deceased publisher in 1974. 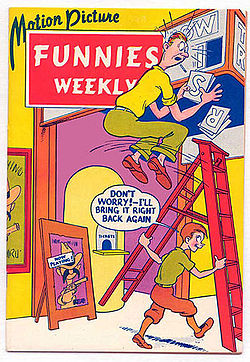 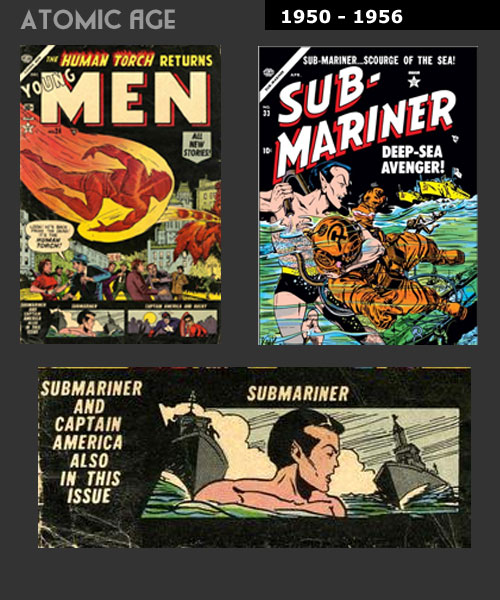 The Sub-Mariner experienced a brief revival in the mid-1950s, starting with Young Men #24 (which also briefly revived Captain America and the original Human Torch) and then in Sub-Mariner Comics #33-42 (April 1954 - Oct. 1955).

Reintroduced in 1962 in issue 4 of Fantastic Four, where he would proved to be a popular returning character in that title. This led to him sharing a starring spot in the split title Tales To Astonish in 1965. Finally in 1968 he gained his own title. 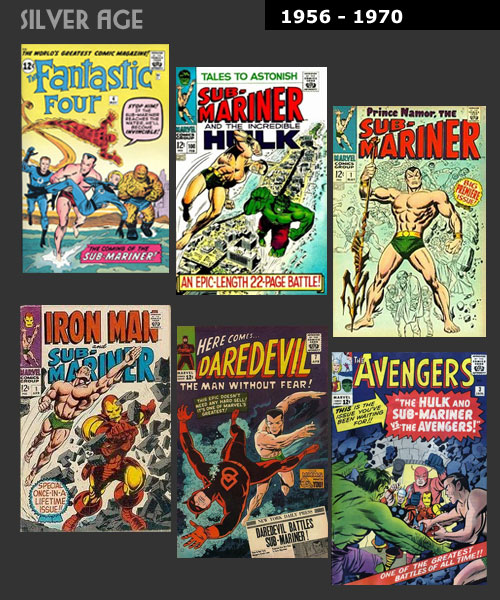 During the Bronze Age, Namor managed to keep his solo title up until issue 72 which was published in 1974. He also was a regular in 3 other ongoing titles: The Defenders, The Invaders and Super-Villain Team Up. In addition to that, there were several multi-issue storylines in other comics (Avengers, Fantastic Four) with Namor. 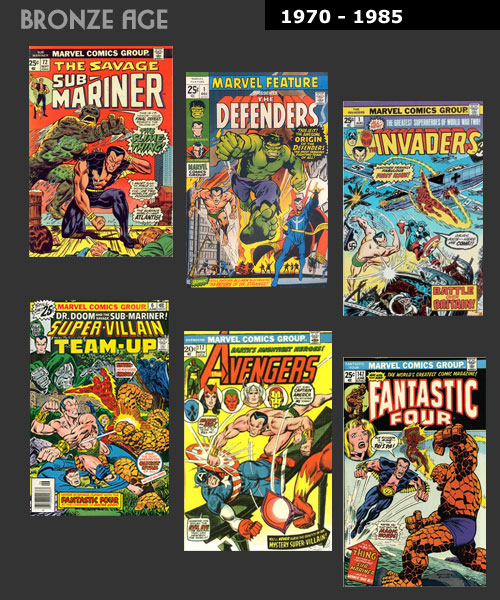 Perhaps due to all this exposure, the Sub-Mariner sort of disappeared early in the 80's with only a 4 issue mini-series in 1984 from J.M. DeMatteis/Bob Budiansky to his name. While technically, this mini-series appears at the tail end of the Bronze Age, I've lumped into the beginning of the Iron age.

These last ages are defined differently among comic fans so you may find yourself disagreeing my my categorizations here. (Realize that the so-called Modern Age spans 3 decades now with no defined end point in sight.)

Highlights of the Iron Age included John Byrne's series featuring Namor and a few appearances in Alpha Flight and Byrne's Fantastic Four. This era also saw the market crushing release of Atlantis Attacks, a mini-series that the late comics historian Les Daniels has blamed for sounding the death-knell to the speculator market. 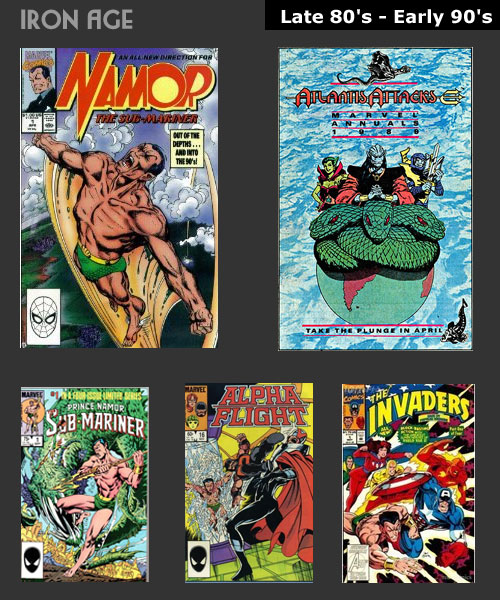 This is perhaps the most schizophrenic point in Namor's publishing history as his portrayals run the gamut of Grim and Gritty, Teen Hero and Comic Foil. He also makes an appearance in the Avengers during Geoff John's run on the title, but no one ever remembers that run, so let's not break tradition. 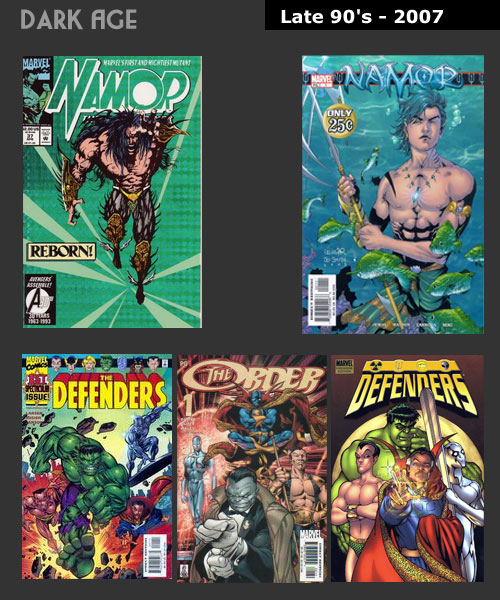 I've only heard this term a few places so far, with no true definition of where it starts however since 2007 marks both the introduction of the first iPhone AND Marvel's Digital Comics Unlimited website, I'm using that as my starting point.

For the most part, in this age, Namor has undergone a bit of a redefinition as Marvel has tried to reinforce his mutant status so that they can put him on the X-men. (Which is how he ends up on the aforementioned Avengers vs X-men mini-series.) 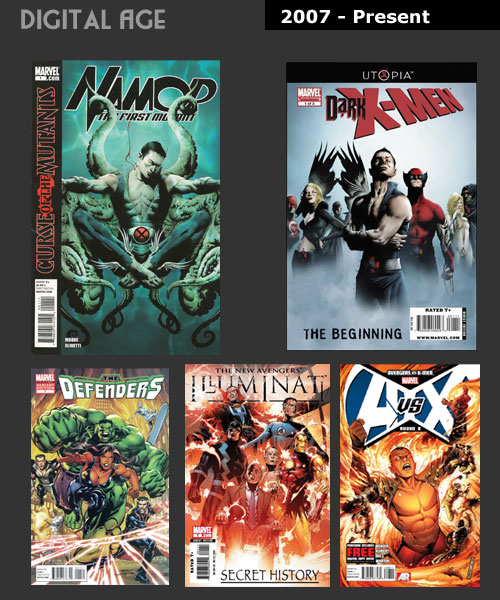 Namor has not fared well during this era. While the mini-series Namor: The First Mutant (a title which flies in the face of established Marvel continuity) has had some nice reviews, we've also seen some rather stupid uses of the character.

As a fat slob in Avengers Dark Reign

or as guy not above marrying his own cousin 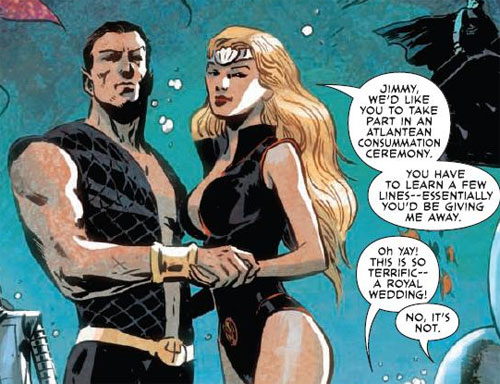 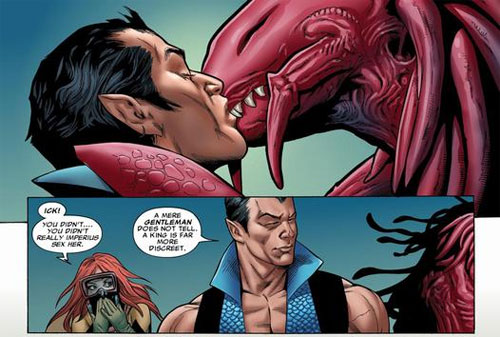 Not I'm not above exploring aspects of a character's sexuality in a story but with Namor, it feels a bit like the aspects are being used as, at best, as a lazy afterthoughts or, at worst, simply for shock value.

Summation: If you look at this time line, you'll quickly see it makes a good metaphor for the waning cohesiveness of Marvel universe in general. As the universe and its continuity have become less important to the editors, so has Namor's appearances and portrayals floundered.

The general perception among comic fans (and perhaps creators too) is that Namor, like Aquaman, simply isn't a character who can hold his own title anymore. I've never held to that belief and have always felt a good writer can find some way to make a book successful. Whether you like it or not, since the DC 52 relaunch, Aquaman has been a consistent top seller for DC. Mostly that's because Geoff Johns has found a way to make the Aquaman interesting without changing the established aspects of the character.

One minor point:
Marvel Comics (the comic, not the company) became Marvel Mystery Comics with #2, so it counts as one title.
However, Namor also had his own book during the Golden Age, so he WAS appearing regularly in three different Timely books!

Thank you Britt! I made an update to the post and gave you credit.

Iron, Dark, and Digital all look about the same to me. I'm not convinced the Iron Age has really ended yet. It's just gotten dumber yet more pretentious at the same time.

You wrote "floundered" and it wasn't a pun. Tee hee.

Man, I've been a bit out of touch with Namor in the last few years and I think I'm happy with that. Growing up in the 70s, that version has been my favourite (Hulk, Dr. Strange and Namor as a superteam? Awesome!) The older stuff is great too. The Marvel Noir version of Namor as a pirate captain (more or less) in the Iron Man story was very fitting, although he was, again, a supporting character.

while it's nice to think that the 50's Sub-mariner book lasted longer than Captain America and Human Torch because of Bill Everett's incredibly great art, I've read over the years that there was a possible Sub-mariner TV show being negotiated, so Timely kept the book and character on the newsstands as long as they could.

@Trey - Yeah, I think it may be a combination of writers not taking the character seriously enough and a lacking in some writers to want to try and approximate how a prince of Atlantis might act and sound (which goes hand and hand with some of the modern jargon coming from Thor and vikings in other comics of late.)

@Matt - While I tend to agree the Bronze age stuff seems to be the Apex for the character, there were some cool ideas in the Byrne run.

@Reno - totally didn't think that when I wrote it. Great catch! ;)

@JP Cote - I never read the Marvel Noir stuff, but that's twice I've seen it mentioned over the weekend. It sounds interesting.

@jim kosmicki - I had never heard that about the 50's Sub Mariner but a TV show based on the character would have been very cool I bet. I see it following a sort of Flash Gordon/Voyage to the Bottom of the Sea style.