Today, I'm running a sort of catch all post as I was up late last night watching the new JJ Abrams Star Trek movie. BTW if you get a chance the weekend, go see the movie. It's really quite amazing just how much they were able to rejuvinate the Trek franchise!

In a way, it's sort of how I wish they would approach more superhero movies. It's got action, sure, but it's not all about action. There is a lot of humor and great character moments as well. Also, I think the movie provides just enough fan service to get us all to smile at the right places, without overdoing it.

The best part, and I think this might be a sticking point for some fans, is that in taking the direction they did with story, it allows the writers to challenged our expectations of the storyline and characters.

In the past, Trek movies, like 40 year old comic franchises, have sort of been tethered to themes and storylines that made them seem a little dated. It wasn't so much the characters that were broken, but the way writers approached the characters. Like glass unicorns, writers would carefully move Kirk/Picard through the movies without really doing anything with them. I think Star Trek 5 and Star Trek 9 are probably good examples of this. And no, I don't call characters dying in a movie character development. It's actually the reverse as now the character is forever frozen behind the veil of death.

On the flipside, the Wolverine movie seems to be all about action and fan service but with no real direction or purpose. Characters show up left and right. They say their lines, but nothing they say really carries any weight because we don't really know who the are.

Perhaps the thing most people seem to be having a problem with with the Wolverine movie is the end where, in an attempt to make the movie jive with what we've seen in the X-men movies, the writers use a completely rediculous story mechanic to explain Logan's lost memories in X-men 1. Was that really necessary? I mean the movie persumably takes place 30 years before X-men 1 so something could have happened in the interim to explain the memory loss. (That's right - it's a 1970's movie, but damn if you'll see one shred of 1970's in the entire movie.)

I think the most interesting part of the Wolverine movie is the 10 minute montage of Logan and Creed fighting in various different wars over the years. Not because of the action, but because it seemed like an interesting avenue to explore with the character. What would their lives have been like all that time?

On the flipside - Wolverine Origins was better than Van Helsing. 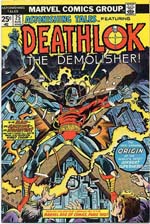 The Bronze Age Spotlight articles that Trey Causey and I have been running have been pretty popular, but last night I received some fan mail that really blew me away...

I ran across your article on Deathlok on your site Flashback Universe. It was dead on, and I thank you for your insight. Just thought I should touch base. Take care --RICH BUCKLER

Yep, that's Deathlok Creator Rich Buckler! I was sorta surprised to see he had read the article, but I guess it really should come as no surprise that a guy who was writing about cyborgs in the 70's would be right at home on the interweb! :)

Here is the Deathlok Bronze Age Spotlight, for those of you who missed it the first time. :)

This version comes with some nice enhancements over the previous version:

Still sadly missing are a color screen and a netbook friendly price. Currently the Kindle DX is $489 which seems like a lot when you can get a Dell Mini 9 netbook for $300. Still, I would not want to discourage early adopters from getting out there and buying the heck out of this thing so they can inspire Amazon to create a color version!

So far, most comments on the new Kindle have been very positive, except for that luddite (jk) Scott McCloud, who made the unfortunate mistake of stating his opinion on the internet. :D

What’s the default shape of our art forms?

And print? Well, print is taller than it is wide right? The printed page is the exception to the rule, isn’t it?

If you want to see some interesting opinions to the contrary, scroll down through the numerous comments following Scott's post. Like me, most of the posters think the shape of the Kindle is fine and that there are some very practical reasons for its vertical design.

Anyway, that's all for today - I hope you all have a great weekend and remember Sunday is Mother's Day, so if you are able, give you mom a call. :)

Jim, I largely agree with your comments on the two films (though I haven't seen Wolverine, only read and heard about it). However, I would argue ST doesn't breath as much "new life into the characters as you claim. Spocks kind of a smug dick, and becomes something different--that's cool. But Kirk? He's the talented rebel--who doesn't play by the rules! Innovative? Fresh? McCoy and Scotty as younger men are exactly the same as they are as older men? No character arcs there at all. I think it was good--and basically for the reasons you say, but the main way it is superior to other (not all) Trek films is more modern direction and hip pacing, improved special effects, (somewhat) snappier dialogue--not because of any warp-jump (like that? ;) ) in characterization, theme, or plot.

Trey, yeah, I'd agree that most of the changes are really surface (with the exception of Spock who we see macking on Uhura)