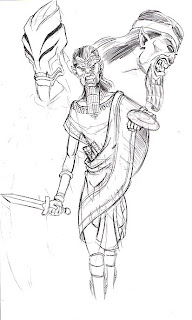 So last Summer while at HeroesCon in Charlotte, North Carolina, Pierre starts talking about how John Byrne said comics should be like Big Summer Movies (or something like that. I have only the vaguest recollection of the conversation as it was a long, fun weekend...)

Anyway, Pierre says he's been posting pictures on a messageboard where other artist hang out and he's got this story idea and he hits me with it...

...Now, I'm not going to tell you what the idea was, because, well, Pierre might want to use it somewhere else one day -

- but let me say this - the idea contained one of those *concepts* I just can't stand - like for instance, Cheerleaders who fight Werewolves! (but that wasn't it) so when Pierre told me his idea I was like, "huh...let me think about it."

Pierre also showed me the pictures he drew for the concept - the first two to the left were among those pictures. 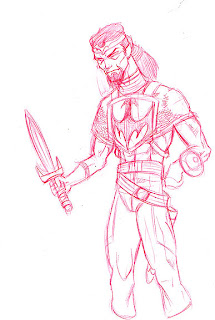 While I didn't like the overall concept so much, I was fascinated with the pictures. I kept asking myself - "Who is this character?"

So with the pictures in hand, I told Pierre I'd find a way to work with his ideas.

So I went home and promptly began to figure out how to take Pierre's story (the good parts) and replace the part I didn't like with something I might have an easier time working with.

Cheerleaders who fight Werewolves is played.

But together, they are played.

So, I asked Pierre if we could separate the two main parts of his concept into two different ideas. Pierre - who've I've got to say is just such a trooper when I ask for such changes - agreed. With that, he drew a newer version of the character. (see the third picture on the left.) 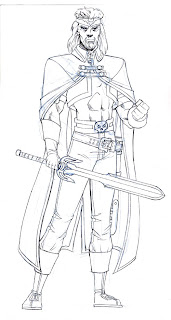 When I saw this picture - everything started clicking. I new exactly who this guy was and where he had come from. He was undoubtedly some badass barbarian king who had fought his way to the top of some long forgotten mystical country.

That guy sounded interesting to me.

But it also sounded like we had come in late in the story. I started thinking it might be more interesting to see just how such a guy takes control of his country.

So, I had Pierre whip up another design for me, this time with a younger version. That's the fourth picture on the right.

This one looked great - I've never been 100% sure what Imperious meant, but I *think* this guy's look is about as good a definition as your gonna get.

You'll notice that in this version Pierre ditched the the cape and added this interesting sort of Bone Shoulder pads. 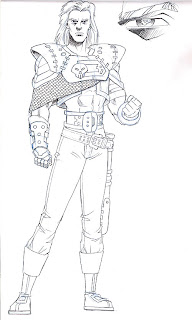 Initially, I wasn't sure of the shoulder pads - they were a little to Football looking.

Still, I sort of liked them.

I also wasn't sure about the chainmail hanging over the arm.

But I did like the idea of a chainmail half shirt - it just makes for a neat visual.

So I suggested a few more tweaks to the character. Then we went through color tests. Always a torturous part of the process, but it can be a lot of fun too.

Pierre also added a neat looking club for the character to use as a weapon.

Eventually, we settled on this final version - a character who has evolved past the barbarian king idea I initially came up with into something quite a bit different.

I've been telling people the concept is basically Deathlok, if Ronnie James Dio had written Deathlok. I don't know how entirely accurate that is, but it's a fun analogy. :D 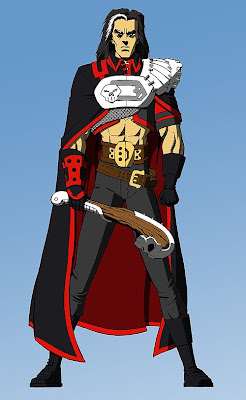 That's all for today. Next time I'll discuss the painful process of naming a character. :D
Posted by Jim Shelley at 10:29 PM

Names are my bane. I just don't feel that I'm any good with them sometimes. It's worse if I don't have a really good set of parameters to work with.

You're going to be kicking yourself in five years, Shelley. Mark my words.

Cheerleaders fighting werewolves would be awesome though!