Revisiting the Wild Wild West: The Night of the Deadly Blossom 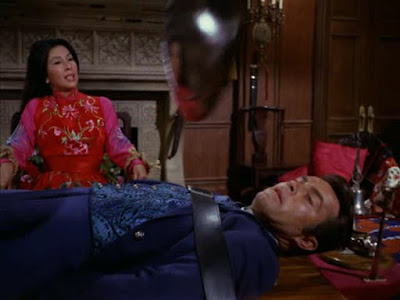 "The Night of the Deadly Blossom"
Written by Daniel Mainwaring
Directed by Alan Crosland Jr.
Synopsis: Jim and Artemus must foil a deadly plot to kill a Hawaiian King on the high seas.

Trey: This episode feels like a mashup of Dr. No and You Only Live Twice. The latter may be accidental, though, as it aired about a month before that film was released in the U.S.
Jim:  I think you're right to credit the Bond films as inspiration on this episode. Especially given that the uniforms Barkley's henchmen wear are similar to the uniforms Dr. No's scientists wear. I'll offer up another suggestion for the inspiration for this episode: Conrad loved working on his prior show, Hawaiian Eye and suggested the storyline as an attempt to travel there again!
Trey: I assume you mean "travel there again" metaphorically. I'm pretty sure both shows were filmed in California.
Jim: If you're going to let facts get in the way of a good theory... But anyway. when Jim tries to leave Barkley's compound, his hand gets cut in the ambush and there's a gush of bright, red blood. It's one of the rare instances of actual blood being shown on the show. Later, a henchman is killed by the swinging pendulum. You can start to see how the show might have gotten tagged as "too violent" for 1960's television.
Trey: You're right. This episode is definitely a bit more violent than most. There's a good mix of Artie and Jim action in this episode, too. 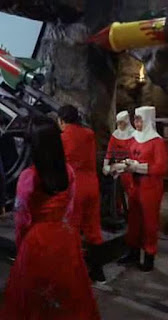 Jim: I found Artie's adventure on the docks more interesting than Jim's struggles in Barkley's residence. He had some amazing bluff when tagging along with the rest of the dock workers. They are all showing some mark on their wrist to gain entrance, but somehow Artemus manages to get in anyway. Later when he gets the idea to hide in one of the crates. I did enjoy how Jim freed himself from the pendulum trap, though.
Trey: Yeah, Jim's plot seemed a lot of marking time to the finale. Artemus seemed to be doing something.
Jim: The reference to the Hawaiian Islands as the Sandwich Islands was a new one to me. Apparently, that was the name James Cook gave the islands in 1778.
Trey: No one can say The Wild Wild West isn't educational!
Posted by Trey at 7:00 AM