Revisiting the Wild Wild West: The Night of the Cadre 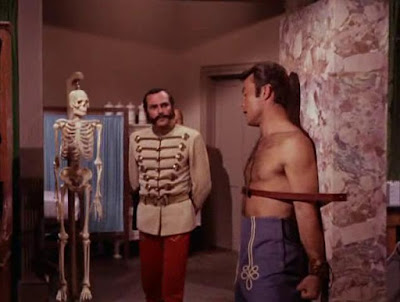 "The Night of the Cadre"
Written by Digby Wolfe
Directed by Leon Benson
Synopsis: West impersonates a killer in order to infiltrate a conspiracy to kill the President with mind controlled assassins.

Jim: I believe I remarked in an earlier discussion how I thought the show should feature more Civil War holdouts as villains. This isn't quite that, but at least it's about a grudge going back to the war.
Trey: Of course, all these guys seem to be Union officers, but yes. I think one of the best details about Trask's character is that he was only a sergeant, but has promoted himself to general. It tells you a lot about the man.
Jim: I found the choice of uniforms a bit puzzling.
Trey: I don't know if they're modelled on a specific army, but clearly they are European in style. I think they're just meant to emphasize what a martinet Trask is.
Jim: Overall, this is a solid plot with an interesting gimmick in the subsonic whistles and mind-controlling crystals. Trask's history of cruelty provides a bit of rare background into a WWW villain. Artie gets to wear a couple of disguises, including one with a fake nose. 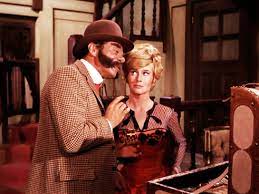 Trey: Agreed. Interestingly, this is the second time the fake element franconium has shown up in a WWW episode. The first time was in the 1st season episode "The Night of the Glowing Corpse." It also shows up in the Star Trek: The Next Generation episode "Rascals."
Jim: So, can we spare a moment to discuss the poor decision to once again cast Richard Jaeckel as a second in command to a lackluster villain? We last saw him in "The Night of the Grand Emir," where he played second fiddle to Don Francks. This time he's stuck with glowering most of the time while Don Gordon chews up the scenery. Gordon, who was in Bullitt, has his fans, I'm sure, but Jaeckel is one of my favorite recurring television villains from this period. I hope he finally gets his due before the last episode of the show.
Trey: You sort of wonder why his character is even following this idiot. I mean, the only thing Trask has going for him is a mad scientist willing to but crystals in people's heads. And his plan collapses under its improbability in short order!
Posted by Trey at 7:00 AM