Fans of this blog will probably be interested in checking out Trey Causey's Years of Wonder tumblr site.

One of the cool things Trey is doing at that site is posting significant events that happened in DC history on the days they happened, like this example: 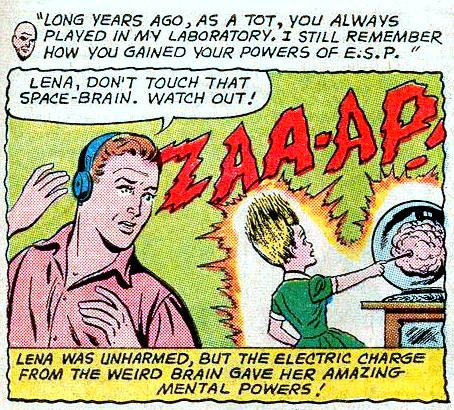 Lena Luthor, younger sister of Lex Luthor, was accidentally given psychic powers by interaction with an alien artifact the young scientific genius had in his Smallville lab.
(from Action Comics #313 written by Leo Dorfman and drawn by Jim Mooney)

I had totally forgotten about Lena Luthor until I saw this image on Trey's site: 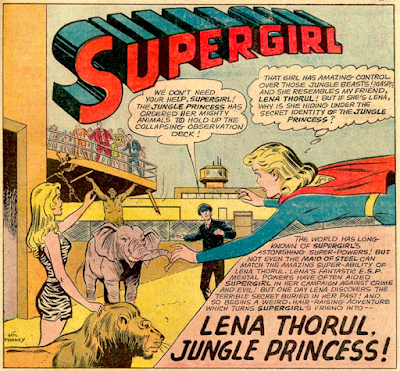 When I saw that panel, I remembered the story (barely) and had to go look her up on the Lena Luthor wikipedia page

In Silver Age continuity, Lena is Lex Luthor's younger sister. After Lex began his villainous career, his family changed their last name in shame to the anagram 'Thorul' and told Lena that Lex had been killed in a mountain-climbing accident. Soon after this they were killed in an auto accident. As a result, Lena never knew she had an older brother, as Lex Luthor himself (with occasional help from Supergirl and Superman) worked to keep her from learning the truth. Lena appeared irregularly in DC Comics' from 1961 to 1975.


There were apparently Post Crisis and Post Infinite Crisis versions of the  character, but I had dropped off reading Superman by that time.

Now I wonder what other Silver Age characters I've forgotten?

Thanks for the mention, Jim. This week we've got the birthday's of Johnny Thunder, Ray Palmer (who Atom #11 tells us graduated from Ivy University in 1954--but that's a different post), and Halo of the Outsiders.