The Secret Origin of Star Trek?

I recently started watching an old black and white television series called Riverboat on DVD a western series starring Darren McGavin and Burt Reynolds set on a steamboat during the 1860's. Upon watching a few episodes, I was struck by a number of similarities between Riverboat and another favorite show of mine, Star Trek.

Remembering that Gene Roddenberry worked as a western writer for several years prior to producing Star Trek, I wondered if there was a direct connection between the two shows. Was this the show that gave Roddenberry the inspiration for Star Trek? I did some research and was surprised by what I found. 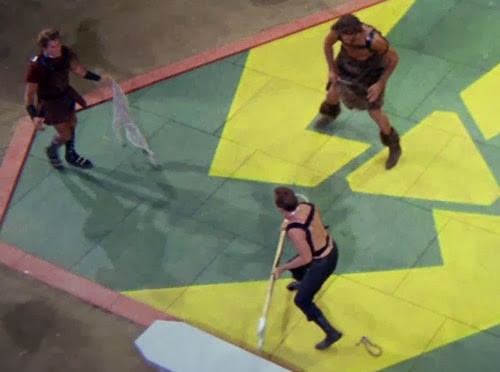 The Star Trek episode Miri echoes the Riverboat episode 3 Graves. In both episodes a doctor works to determine the cause of a plague which has rendered an area deserted. The infamous space hippies episode of ST Way to Eden is reminiscent of the Riverboat episode Guns for Empire as in both episodes a group of people are searching for a utopian society. 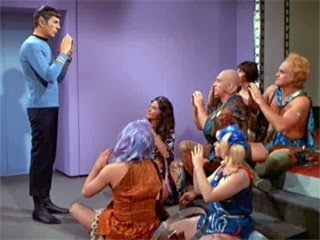 The ST episode Conscience of the King is similar to Riverboat's Trunk Full of Dreams as both feature a father/daughter acting troupe. In both episodes the father plays the role of MacBeth.

The last episode of Riverboat, Listen to the Nightingale, featured both Jeanne Bal and DeForest Kelley.

The 1st episode of ST, The Man Trap, was a story featuring the same pairing of Bal and Kelley. 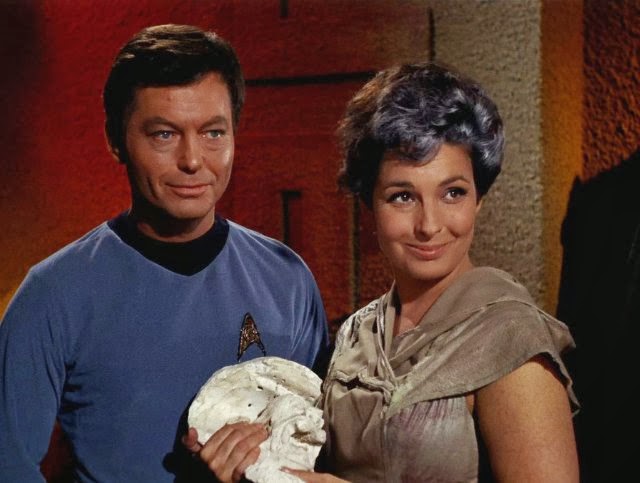 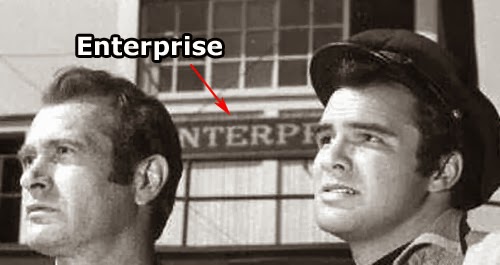 A number of people worked on both shows including:
Now while all of this is an impressive amount of circumstantial evidence suggesting a link between the two shows, I was unable to find a real smoking gun. That is to say, Gene Roddenberry never mentioned Riverboat as an inspiration for Trek in any interview that I was able to find. He has gone on record several times as saying that he initially pitched Star Trek as a sort of Wagon Train in space. That strikes me as odd because a wagon train suggests that there would be more than one ship with some of the ships possibly having families on them. That's not Star Trek at all. That description actually suits Battlestar Galactica better. So why would Roddenberry refer to Wagon Train when it not only didn't accurately describe his concept but might even cause some confusion?


Here's what I think happened: It seems likely that Roddenberry who was pitching scripts to various westerns at the time would have at least heard about Riverboat, either on his own or through other writers at a local watering hole. I suspect he was taken with the idea of an ensemble show set on a ship and filed it away in the back of his mind. Later when it came time to pitch Trek, he realized that using Riverboat in space wasn't very good because Riverboat was a bit of a failure. (It  only lasted two seasons, and never scored very high in the ratings.) Instead he used Wagon Train as his hooky reference when pitching Trek. As time went on and Trek became its own creation, he forgot Riverboat altogether.

One final coincidence (after the fact) - Based on references in the show, a small town in Iowa has declared itself the official birth place of Captain James T. Kirk (with Roddenberry's blessing.)

The name of that town is: Riverside.

I believe Roddenberry's comparison of Star Trek to Wagon Train was based on both groups being pioneers who trekked across vast distances - one in space, the other the desert plains of America; in Star Trek from one planet to another, in Wagon Train from one settlement or town to another.

If anything, Trek is based on concepts from the movie Forbidden Planet.
Saucer-shaped ship using faster-than-light drive to visit outposts and render aid when needed.
Male ingenue captain who gets the girl.
Crusty ship's doctor who's also his best friend/advisor.
Tech-obsessed chief engineer (combined with alcoholic ship's cook)
military-structure chain of command.
If you consider Robbie (who ends up as one of the crew) as a Spock-surrogate, it's a pretty obvious candidate for "inspiration"

A memo from the UCLA files, which is reprinted in David Alexander's Roddenberry biography, sheds some light on the movie's influence:

You may recall we saw MGM’s 'FORBIDDEN PLANET' with Oscar Katz some weeks ago. I think it would be interesting for Pato Guzman to take another very hard look at the spaceship, its configurations, controls, instrumentations, etc. while we are still sketching and planning our own. Can you suggest the best way? Run the film again, or would it be ethical to get a print of the film and have our people make stills from some of the appropriate frames? This latter would be the most helpful. Please understand, we have no intention of copying either interior or exterior of that ship. But a detailed look at it again would do much to stimulate our own thinking.

Also, would much appreciate it if you could provide me with a credit list on that picture, specifically the director, art director, special effects men, etc. Thank you.

Hard to sweep aside all of those similarities. Although I'm sure many would do just that :) Cool post! I had no idea this other show existed!

Interesting post, though many of those things are pretty circumstantial. I think your making a bit much of Scotty's drinking to fit the theory. In "Trouble with Tribbles" Kirk has to order Scotty to shore leave because he'd rather stay and catch up on work. He does drink a Kelvan under the table, but that is intentional.

One correction: Alexander Courage is a composer, not an actor. He composed the theme song to TOS, but also did music for The Waltons, Lost in Space, and Land of the Giants.

Interesting comparison. I expect that some of the similarities could be coincidence but not all. Would seem there has been influence.

I'd also expect that there were other series and movies that would inspired TOS.

@Kid - yeah, your reading of that Wagaon Train analogy fits a lot better.

@Britt - Thank you for that memo! That's very fascinating and explains a lot of other questions I've had about the series (like what was the inspiration for Spock)

@Max - Yeah, I discovered Riverboat in looking up some information about Darren McGavin. Like you, I had never heard of it before.

@Trey - thank you for the catch on Courage. I've updated the post.

@Dennis - yeah, I think that Trek, like a lot of great shows, probably had a multitude of inspirations and influences, some of which have been pointed out in the comments section here and some which we may never know.

I think you are absolutely right! Actually I was just watching an old episode of Riverboat and thinking much the same thing (and then Googled "riverboat and "Star Trek", which brought me here.)

You do a good job of pointing out the many similarities. But for me the real giveaway is the central characters and how they relate to one another. The flamboyant Captain and his taciturn second-in-command on Riverboat is VERY reminiscent of the Kirk/Spock relationship (minus the "logic" twist). And the guy in the engine room - who I think is supposed to be Irish - is strikingly similar to Scotty.

Put that together with the fact that both ships are named Enterprise, boldly heading out into new adventures, and you do have a much better model for Star Trek than Wagon Train. But, as you say, the latter would probably have been much better known to the people that Roddenberry was trying to pitch it to - and rather more successful.

Riverboat was probably not the only influence, of course. But an important one, I suspect...