How would you revamp the Legion of Superheroes?

I talked about DC ending the Legion of Superheroes on this blog a few months back, but I've never talked about how I revamp or continue the brand. Here are a couple of ideas I had or talked about with friends. This first one is probably going to be the most disliked, so let's get it out of the way now.

The idea here is completely ditch most of the superhero aspects of the series altogether and make it more like a high school teen drama. 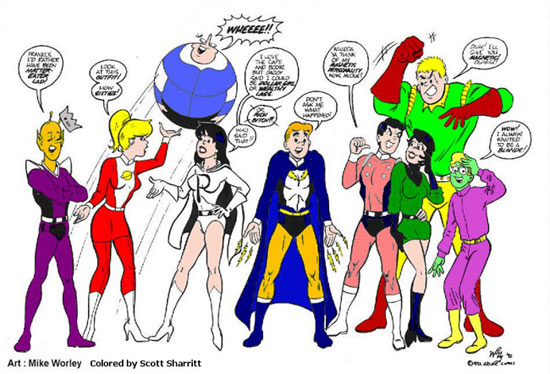 There could be some mystery and adventure in the stories (about the level you might see in an Archie comic) but the stories would primarily focus on the romances and relationships between characters. I would have an artist like Amanda Connor draw the stories. 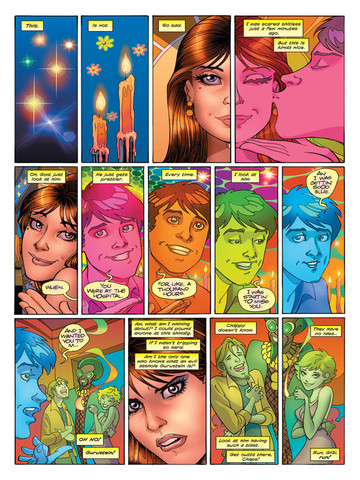 If this doesn't like the Legion comic for you, the long time fan, that's because it isn't meant to be. This is an attempt to find a new niche for the legion since it's becoming painfully apparent that modern comic readers have zero interest in the characters.

I will say this, it's well known that the Legion fandom is second only to the X-men with the number of female fans amongst its ranks, so it's possible a more romance-centric comic might be the way to go.

This idea would be a 12 issue mini-series. The series would be the story of a future legion member we have never met (Kid Chrono) who has the power to jump back and forth between time. He discovers the existence of a heretowith unknown legionnaire (Laser Lass)...

...who seems to have been a long time member, but for which no records or memories exist today.

To find out more about Laser Lass and why no one remembers here, Kid Chrono uses his powers to jump back in time to examine several key Legion apocryphal events which long time fans may have heard about, but never read (like the first battle against Mordru the Merciless or the death of Power Boy.)

These adventures would all be drawn in the style of the era they take place (or as close to it as possible) with several key legion artists from the past being employed to work on the series (Mike Grell, Keith Giffen, ect...)

I suspect this story idea might not appeal to current DC editorial as the notion, on the surface, is not one that sounds "new reader friendly." However, I think it could work in the same way as All Star Superman which often tips it's hat to old 50's and 60's stories without alienating new readers.

Idea number three isn't from me but comes from Trey Causey. When I made my original post about the Last Legion comic, I mentioned this ideas I had on how I would you fix the legion to Trey who replied with this cool idea:

The Legion are the teen heroes of the future Earth. They're celebrities who lead charmed lives.  Maybe too charmed. A glitch reveals the truth. Their  idyllic world is nothing but a computer simulation. These laboratory created, super-powered children are the creation of the eccentric (and long dead) billionaire, RJ Brande, who believed the future needed saving from itself.

Escaping their somewhat malfunctioning AI minders, the kids emerge into a future much darker than anything they've know--and much more in need of them.

What I like about Trey's idea is that it sort of gives you your continuity cake and lets you eat it too. With that idea, you could have this new Legion encounter revamped versions of old threats like the Fatal Five who are markedly different, but still similar in some ways, to the ones they encountered in their simulated adventures.

With that, I must end this post with a question: How would YOU revamp the Legion of Superheroes? Or do you think that it's just not a concept that could be saved in any way in this day and age?

Heh. Some good ideas there. I think you could definitely play up the relationship element (which they did in a way back in the day, but you could do in a more concerted way) without going completely Archie. Maybe making Saturn Girl (or another female Legionnaire) your initial viewpoint character?

My basic idea or at least the spirit of thing is this:

There is a threat on the horizon that could doom the 30th Century. Cosmic Boy decides they must bring Superman to their time. They pull it off. ..almost.

A fairly super but a long way from being a man Clark Kent goes on the adventure of a lifetime. This would be basically be a limited series and you could almost think of it as Clark is kind of Harry Potter to the Legion's Hogwarts. He comes face to face with his eventual legacy and has no freakin idea how he could ever possibly live up to that. But these people from another time need his help so he's going to try.

Clark's our POV character into the world and the heroes of the 30th Century. He would form bonds and friendships but he would have to eventually say goodbye to them. He's made to forget his adventures until the climax of the story taking place years later when the now adult Legion reunites with boy who became Superman to fight the final battle.

"The Earths have been reduced to 52 parallel dimensions, but no one remembers the pre-52 world: that is, all but one who has been driven to remember it due to her dreams. DREAM GIRL must gather and lead a team bent on undoing and freeing the universe from the sinister secret behind THE 52 NIGHTMARES."

@Trey - yeah, Saturn Girl seems the way to go (especially with her being a telepath.)

I think the biggest problem with this is the future aspect of it. No one seems to care that much about the year 3000. It almost negates the current story lines by saying, don't worry, this earth destroying event doesn't matter because the Legion exists a thousand years from now. So I think the best way to handle this, dare I say it, is with time travel. Here’s what I’m thinking. There are villains from that century that have access to time travel. So make the Legion a time travel police agency. So now the legion can interact with everyone in current continuity and they can even interact in current events. Like The Wicked Magician is going back to help the Crime Syndicate win when they tried to take over Earth Prime. We need to go back and stop him! So now there’s a lot of interactions with everyone, a reason for them to actually be there, but have to follow strict guidelines as to not interfere with things as they are suppose to happen. Say something does change. Then it makes the future story telling relevant again because the effects of something changed can be shown in the future. I think this would help clear the distance between them and all the other books and make it more relevant to what’s going in the DC universe as a whole.