Continuing my series of 100 Page Super Spectaculars that never, I present this appropriately post-July 4th entry. 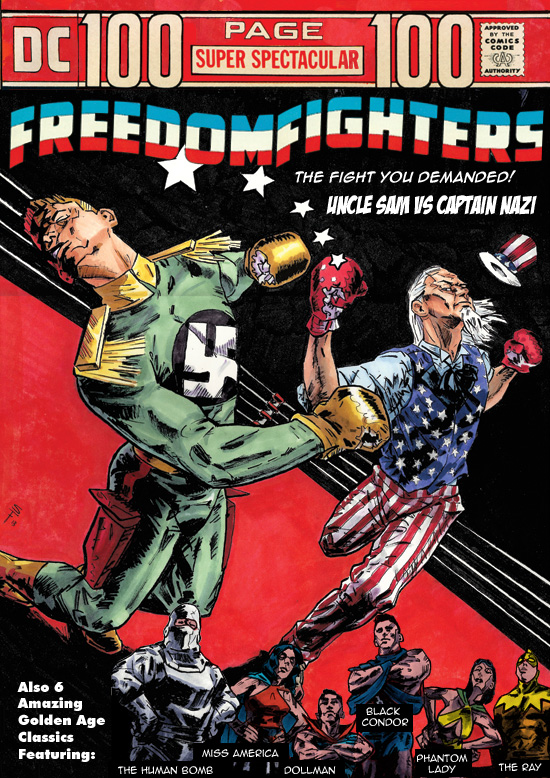 This amazing cover illustration was created by the versatile Seth Frail. You can check out more of Seth's artwork at http://sethfrail.daportfolio.com/

I've made no secret of my fondness for the classic Freedom Fighters and on numerous occasions have lamented DC's attempts to reboot them in the last decade. Currently, DC seems to be committed to putting out various mini-series with the characters in an attempt to (re?)enforce trademarks on the characters... 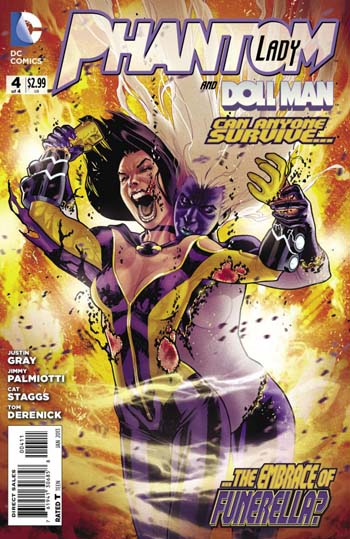 I have to wonder about this. Why does DC care so much? One might argue that the Freedom Fighters have some intellectual property value that DC wants to lock down but based on Ed Love's well written article in Two Morrow's Quality Companion, DC has already been able to successfully defend their sole use of the characters over the years. (Ed describes an incident wherein DC Editor at the time Dick Giordano sent Bill Black, publisher of Fem Force a cease and desist letter.)

However, according to Black, the reason he changed the name of his Phantom Lady to Nightveil was a bit different:

DC claimed they owned the name Phantom Lady and, in 1983, Dick Giordano (then DC editor) called me and asked me to cease and desist the use of the name. Big company pressuring a little company… I was just starting up, so I rolled over on this. I later discovered that DC had not and COULD NOT trademark the name Phantom Lady. But by then I had re-created the character as Nightveil. All this was a good thing because Nightveil has become such a great character far exceeding Phantom Lady in any incarnation. At AC we have a “retro” history as Femforce started during World War II. I created the Blue Bulleteer as the masked persona of Laura Wright before she becomes the sorceress, Nightveil. So from 1943 into the 1960s, Laura is Blue Bulleteer and runs around in a costume that is based on the Matt Baker, Fox Features version of Phantom Lady. The fans love it!

And while I would be relunctant to disagree with Mr. Black, if you look closely at the covers of this new Phantom Lady comic book, you will plainly see a TM symbol beside both Phantom Lady and Doll Man. Here is a close up: 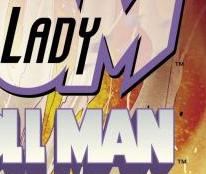 And while DC owning the trademark to these characters makes sense (they did buy them after all.) There is another development in the Trademarking of Public Domain characters. Dynamite Entertainment has trademark the Green Lama, Black Terror, The Owl, The Arrow and Pyroman as of 2008.

And pursuant to that end, last week Dynamite published the first issue of a new series featuring their version of The Owl - I guess because during that spate of creating logos for their versions of characters during Project Super Powers, there was no cover  using their Owl logo, which would make defending the trademark a bit difficult. It would be interesting to see someone try go to court in defense of a trademark without ever publishing a single issue of the property in question. ;) 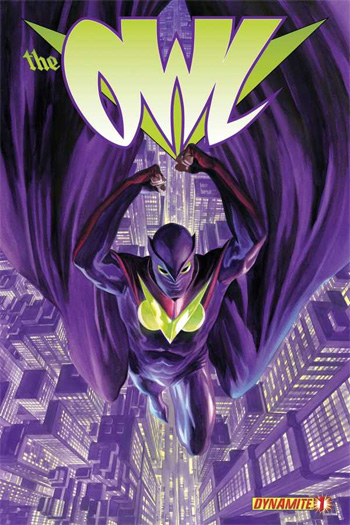 Anyone read this? What did you think?

I think Argosy has a superior claim to Green Lama.

Trademarks only apply to titles and covers. And, trademarking a comic does not necessarily conflict with trademarks on prose, film, music etc as long as the two are clearly separate. And, it means Dynamite has to make use of said trademarks. So, they almost had to do the Owl mini (and probably why the Green Lama, Black Terror and Zorro appeared in MASKS). Look for the others to appear prominently on the covers of the next SUPERPOWERS arc. In some ways, Dynamite has been very cagey in walking that line between copyright and trademark infringements.

For what it's worth, the Green Lama pulps are still under copyright by the estate of the author which limits a bit what Dynamite can do with the character (his golden-age comic appearances and presumably radio are public domain). I think that's why even though the Green Lama appearing in MASKS on the covers and adverting covered the trademarks, yet was not a significant presence in the book itself... the nature of the story prevents the magician and Raboy version of the character but make him too close to his pulpish roots and risk the further ire of the Kendall Foster estate which was already upset with Dynamite over their use of the character. The estate is already licensing new prose stories of the pulp version as well reprints, so Dynamite has to be as careful with him as they are with their Edgar Rice Burroughs knock-offs.

As far as Black, DC, and Quality... it should be noted, you CAN TRADEMARK public domain properties. So, depending on said date of the letter, DC could be in the right regarding the trademark. However, DC does not have the copyrights to the Quality characters beyond Plastic Man, Blackhawk and possibly Doll Man and Doll Girl. And, even those are limited as the copyrights to the Quality titles didn't get renewed until the post 1950 issues. Doll Girl, the one character never made use of other than establishing her death at some point in the past to give Darrell Dane some angst in Freedom Fighters, is the one Quality character they have the strongest claim to, all but one of her superhero appearances were renewed by DC.

What's tricky is you cannot use your trademark though to block someone using public domain characters in ways that don't infringe on the trademark. Thus, even if DC does own the trademark to Phantom Lady, it shouldn't prevent Black from reprinting her stories or using her INSIDE the pages of Fem Force (and any appearances of her on the cover, make sure it's the Fox version ie blue and red outfit vs Quality's yellow and green). So, DC's letter was legally and literally in the right, but from accounts, it gives the impression of having more rights than they really had. Technically, DC's claims are further weakened by the massive re-designs of late. If they don't make use of the classic designs, the original likenesses will no longer be covered under their trademark claims. This includes the Quality, Fawcett AND Charlton characters which are all technically public domain.

AC's understanding and use of copyrights and trademarks is a bit hard to pin down as they are often inconsistent in their use and statements. Although, if anyone had a right to contest Dynamite trademarking the Green Lama as a comic character, they did. They had been using and reprinting the character in Fem Force and their Golden-Age Men of Mystery books as well as having a two-part mini-series in the works.

I signed up for THE OWL series because he is one of my favorites from the Golden Age.

The first issue was okay. Nothing critical to say about it. It gave a nod to the SUPERPOWERS stories (a series I stopped reading after #2 btw), but definitely goes its own way.

As for Dynamite, I only read the main SHADOW book (which I really enjoy), Waid's Green Hornet (which I will stop once Waid once he leaves it), and followed MASKS (what a long story that could have been told in six or less issues), enjoying it enough to buy all eight issues.

If I see The BAT or BLACK FURY in the quarter bins, then I'll try them, but neither of them, in this Dynamite incarnation, appeal to me.

Btw, I am in love with Seth Frail's style.

@Cash_Gorman - thank you for the insight! It seems to more I learn about copyright and trademark, the more murky it seems to actually be.

That's an interesting theory about the Arrow television show. It sure seems to have undercut whatever plans Dynamite had for their Arrow.

@GACN - Chris, at the moment, Seth doesn't have any finished work with any independent publisher though I think he had an entry in at Zuda back in the day. On his site he has a number of sequential art pages, but to the best of my knowledge nothing from the Big 8. (Maybe we should call it the Indy 8?)