The New Wave of Superhero Novels

Last week, I started a discussion on superhero literature over the years which resulted in quite a number of commenters adding to the discussion in the comments section. I found their replies very rewarding as several people mentioned novels I had not considered or, in some cases, never even heard of.

This week may find me returning the favor as I review three newer superhero novels I’ve read so far this year.Whether as a result of the current superhero movie craze or the more democratic self-publishing climate, there seems to be quite a number of new off brand superhero novels being published now. Here are three more popular ones that I've read.

Confessions of a D-List Supervillain 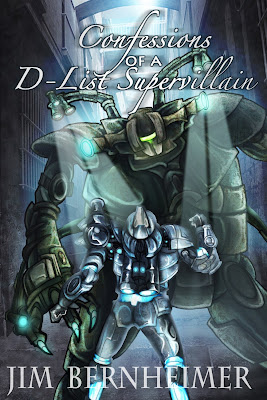 What it's about:
This is a fun story from the view point of a working class supervillain named Mechani-Cal who finds himself with a chance for redemption (and love) after he manages to save the Earth from certain destruction.  Imagine if your classic old school armored villain like the Beetle or the Porcupine suddenly found themselves working alongside the Avengers and that's the premise here. Cal is an interesting mix of ingenuity, bravery, insecurities and anti-authoritarian attitude. His struggle to balance his old school villain ways with the expectations of his comrades provides a lot of fun and challenging conflict in the book.

What is does best:
Character interaction is the highlight of this book. Also, watch the clever ways that Cal solves problems the heroes encounter.

What could be better:
If I had a complaint about this story, it would be that it seems a bit contrived at points. Not so much that it bothered me, but there are a few plot points that seemed sort of jammed in for no reason.

Overall:
The narrative of all three books is serviceable but nothing special. I think the issue here is that the authors of all three tend to write so much from a characters point of view that they don't have a lot of opportunities to dazzle you with witty word play. 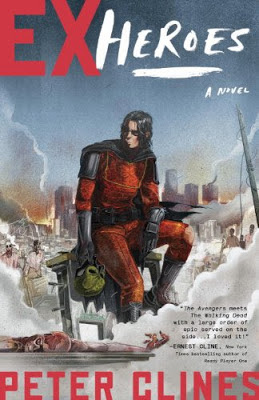 What it's about:
In a world where the Zombie Apocalypse has occurred and destroyed civilization, a handful of superheroes struggle to keep a city of survivors protected. The main characters are St. George, Stealth, Cerberus (who sort of map out as Superman/Batman/Iron Man analogues respectively) and Gorgon who has a sort of life drain/power up ability. This is the first book in a series and it jumps right into the premise. The book starts after some time has passed since the breakdown of civilization and the heroes are still learning to cope with the shift in their roles form crime fighting vigilantes to resource managing municipal leaders. They are stuck in a conflict that has them caught between normal citizens who aren’t entirely sure they need super powered caretakers and the emergence of a villainous game changer in the zombie war.

What it does Best:
Clines does a great job juggling the different character view points while delivering big screen action with some excellent plot twists. With St. George and Stealth, he's managed to take the tired old Superman/Batman archetypes and give them some new life and personality. Clines also makes great use of the THEN and NOW chapter format to give us a look at the world prior to the apocalypse.

What could be better:
Stealth, the Batman analogue, is female, and we are often told via other characters how sexy she looks in her costume. The female characters never say the same about the male characters, so each time it comes up, it becomes more awkward. Also, don’t go looking for a lot of pithy prose here. This is a very straightforward narrative that at times reads like script direction.

Overall:
Because of the workmanlike prose and the fact that Clines felt the need to tact on "A Novel" onto the title (a gimmick that always makes me a bit leary of a new book) I was initially lukewarm on this book, but I found my attitude quickly turning around as I kept on with the story.  I don’t think I’ve ever encountered a book that ever utilized the action adventure aspect of the superhero genre so well. The closest I can think of was book two of the Wild Cards series during the alien invasion chapters. Plain and simple: this is what Marvel Zombies should have been.  Bonus: There is also an excellent explanation behind the origin of the Zombies (which is usually one of those things that gets glossed over in such stories.)

You can find out more about the series at http://permutedpress.wikia.com/wiki/Ex-Heroes

Soon I Will be Invincible 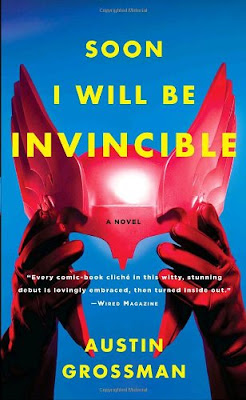 What it’s about:
Starting in a prison, we meet Doctor Impossible, a notorious supervillain with a 300 level IQ and incredible strength and toughness. By all counts, he’s a deadly threat to the world at large, but he’s lost a bit of his mojo. At a time when he’s questioning his direction in life, his archrival Corefire (a Superman analogue) has gone missing. This prompts him to escape from prison and launch his grandest scheme yet. The flipside of this tale is the story of Fatale, a female cyborg who is the insecure rookie on the super team The Champions who are tasked with stopping Doctor Impossible. Through Fatale’s eyes we see that the world of the heroes is quite different than most people think.

What it does best:
The book shines when the story is in Doctor Impossible’s view point. His asides and observations on humanity and his plight are interesting and humorous. There is more action in the story that I was expecting as well. I had this pegged as a sort of Hitchhiker’s Guide to the Galaxy for Superheroes, but it is a good deal more serious than those books.

What could be better:
Anytime the story shifts to Fatale’s viewpoint, the story lags.  Readers will find themselves struggling to connect with her motivations as they are bit unfocused. Her interactions with the Champions don’t pick up her side of the story either as they aren’t fleshed out very well and are all a bit too similar in tone and personality.

Overall:
While written with a bit of tongue in cheek style, this is no simple Venture Bros/Monarch rip off, which is unfortunate, as if it had been mostly about Doctor Impossible, it would have been more enjoyable book. As it was, chore of listening to Fatale’s adventure brings the book down quite a bit.

If you have any suggestions of newer superhero novels you think I should check out, please let me know in the comments section!