Fathers of the Marvel Universe

Upon consideration of Father’s Day today, I was thinking about how fathers are portrayed in the Marvel Universe. Here’s a rundown the most prominent ones:

Nathaniel Richards (father of Reed Richards of the Fantastic Four) 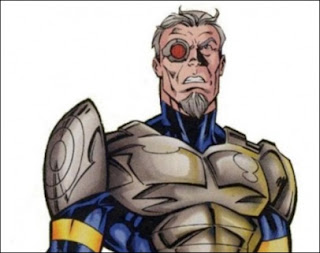 Scientist and inventor who, well, it’s complicated, but he got involved in crazy adventures on a war torn world in a parallel universe which kept him too busy to appear much in the Fantastic Four. 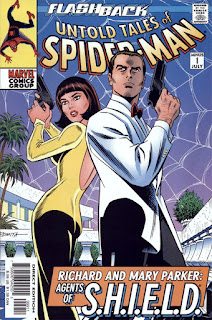 The father of Spider-man was a CIA operative who was killed in plane crash  while Peter was just a young boy. Peter’s mother also died in this accident, as she was also a CIA operative. Note: There are some conflicts in Marvel continuity about the timing and circumstances of the death of Peter’s parents, so I wouldn’t be surprised if they showed up at some point. 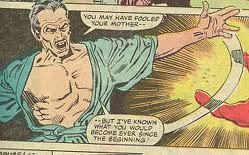 Brian Banner was a Nuclear Engineer working for the US Government whose alcoholism and anger management issues turned him into a wife beater. Brian’s abusive nature escalated until he eventually killed Bruce’s mother in front of him. Years later, Bruce would end up killing Brian in an argument by his mother’s grave.

In Silver Age Marvel continuity, Battlin’ Jack Murdock was a boxer who instilled in his son the value of an education and nonviolence.

However, in the 80’s, Frank Miller reimagined Daredevil’s father as a drunkard and child abuser.

Recently, Marvel Now writer Rick Remender decided to revisit Steve’s early childhood, presenting Joseph Rogers as an alcoholic wife abuser. Remender maintains that this is all within continuity, however that assertion has some dissension among fans as they feel it conflicts with established Cap stories.  Tumblr user wondygirl put together an excellent collection of images of the earlier references to Cap’s father. (Who rightly points out that being an alcoholic doesn’t necessarily makes someone physically abusive.) 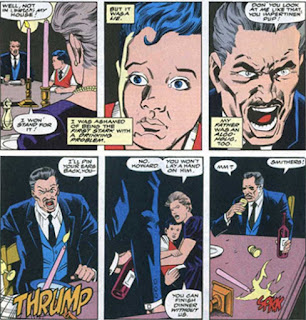 Another alcoholic father whose constant pushing and badgering of his son resulted in a strained relationship.

So, what do we have here? Deficit dads, alcohol abusers and wife beaters. That’s a far cry from DC’s compassionate Pa Kent and noble Thomas Wayne. While I would be reluctant to draw any hard and fast conclusions on this roundup, I think it suggests Marvel writers (past and present) have a bit of a lazy approach when fleshing out their character’s past. Or perhaps they think that readers can more readily identify with stories of heroes with poor father/son relationships. Or maybe this was simply a way to add a bit more soap operatic angst to otherwise well adjusted characters?

Whatever the reason, I hope you had a better father/son relationship than most of the heroes in the Marvel Universe!

I was never into the abusive father angle with Banner. It just seemed like tacking on an extra wad of angst to a guy who already turned into a green dull-witted monster whenever became angry or stressed.

Speaking of tacking on angst, the idea of Steve Rogers father being abusive is even more silly. It really just feels like "Oh Cap's too clean let's throw some dirt in his backstory."

Having Peter Parker's parents being spies kind of takes away from his everyman quality. (Can't help but notice how much Peter's mom looks like Betty Brandt on that cover.)

I dropped the new Captain America series over how Cap's pop was presented. I simply found it offensive and unoriginal. I expected better from Remender.

@Trey - I did consider Odin, but left him off partially due to time constraints and also because some of his baggage comes from the Norse legends.

@MattComix - I agree with you around the Spy stuff taking away from the everyman angle. And I just saw in the comic news yesterday that Marvel is going to revisit Peter's family in a Spider-man Family title soon so any hopes that the idea might have been forgotten are slim now.

@GACN - Judging by sales of the Marvel Now Captain America title, you weren't the only one who dropped the book. :D