Note from Jim: It seems Pierre and I are getting in a groove of posting every other week (more by providence than by planning.) As such, Pierre (pictured below) provides us with today's post: A look at a comic you may not have heard of, but may want to check out! 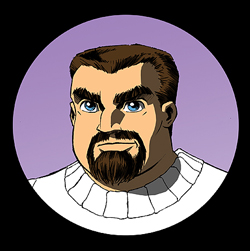 I can't help but think that IDW are doing a good job in general with their comics, especially with their Artist Editions. If I was more of a foolish fool then I already am, I would be buying wayyy too many of their Artists Edition. I own the Wallace Wood one (which will require a blog all of its own at some point) and have to stop myself from buying more. But in one of my visits at the comic shop close to my place... I could not help but notice John Byrne's new series...TRIO.

No... It is not the logo, or the artwork that got my attention. It is the non glossy cover. It looks like some very think bond paper, and I liked that paper. I don't like the glossy paper because too often you have to tilt the comic in order not to have a glare on the page as you try to read it or as you try to admire the artwork, but the TRIO cover paper was perfect, and it fitted perfectly with Byrne's artwork. 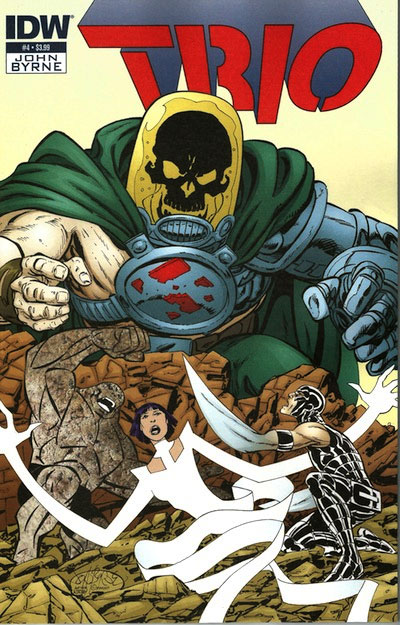 But I did not pick it up.

For the past, 10 years... I have been pretty much a TPB buyer. Sometimes I will get the single issues... but more often than not, I will decide to wait for the TPB. Why says you once more?? Because wayyyy too often I end up buying the same comics multiple times.

An example of that is the Green Lantern: Sinestro Corps War. I just bought the Absolute edition... so now I have to find someone to whom I can give the HC that I have. So when I saw the Trio comics... I waited for the TPB as usual. (Ironically... the TPB has a shiny glossy cover. ;)

And I know what many are thinking... TRIO?? really??

I know what you guys are thinking because I had the same thought at first.

That this is the Fantastic Three... a cheap lesser version of the Fantastic Four. Espescially in light that the first foes that this TRIO faces are a Sub-Marinner like character... 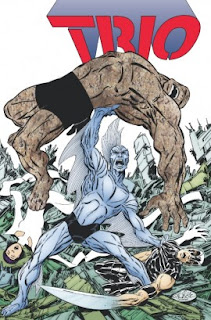 and something not unlike Galactus. 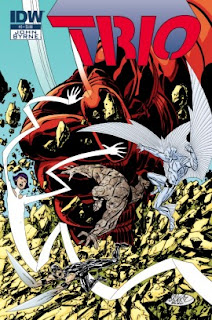 But although it is derivative from the Fantastic Four... I enjoyed it. I had a great time reading that comic. It has that retro feel not unlike what we tried to do at Flashback Universe, but as opposed to us guys who try to recapture the magic of the comic we read a few decades ago... here it is MADE by someone who was already making comics all them decades ago.

Classic super-heroes... huge monsters... EVIL Nazi villain, this comic has it all. 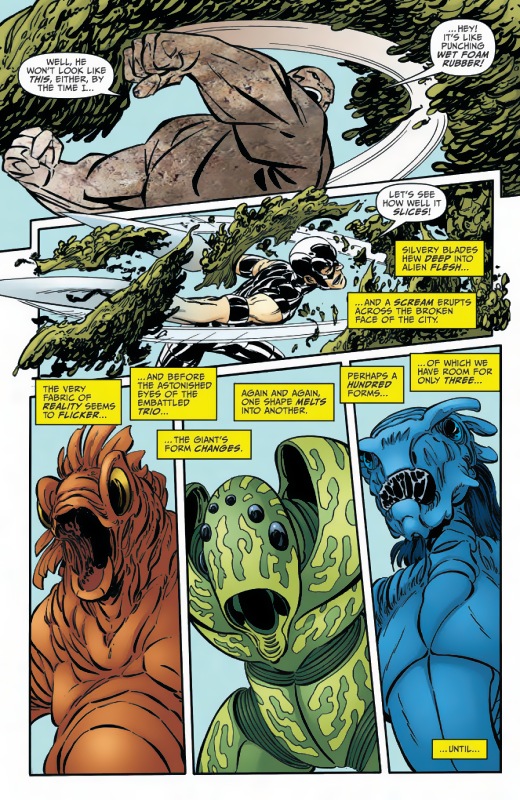 If you guys like our FBU comics, you have to get that TRIO comic. Heck we might as well stamp the FBU logo on the cover, this IS a FBU comic. Is it perfect??? Of course not,

My biggest complaint with the TRIO TPB is that it ends on a cliffhanger. I would have much preferred to have a complete story in the TPB, and I can understand if it is a turn off for some people.

I appreciate Byrne's willingness to do this kind of comic. I even appreciate him wanting to do something clearly inspired by the Fantastic Four. Why not?

At this point so much of Marvel and DC is completely divorced from anything he might have once enjoyed about the characters. It would take a severe change in regime and philosophy at Marvel for there to even be a chance of a Fantastic Four book he would even want to read much less participate in as a writer or artist. (I guess what I'm saying is I can relate.)

Unfortunately I'm just not that sold on the "rock, paper, scissors" thing conceptually. It just doesn't quite pop for me. I love that Byrne is being brave enough to approach his comic this way with no apologies or compensating for what some modern readers might think is "lame".

I just kinda wish he had a better superhero idea to go along with it.

Yep, I'm afraid I have to second Matt's comment in every aspect. Scissors is especially kind of goofy.

Come on Jim, Scissors is the greatest super-hero since Flatman...
Oh.... I guess I see your point. ;)