There were many archer characters during the Golden Age, but one of the more interesting was Quality's Alias the Spider. Below is Pierre's version of the character. 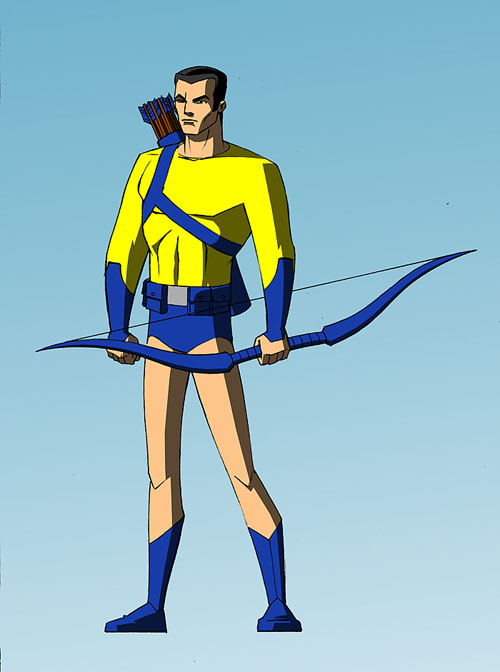 The Spider was, in reality, playboy Tom Hallaway. Hallaway had tired of seeing criminals have their own way harassing and murdering honest citizens, so he adopted the guise of The Spider to settle the score. The Spider fought crime in a yellow shirt and blue shorts. He was armed with a fairly ordinary bow and arrows, a special car known as The Black Widow, and the assistance of his valet Chuck (who helped out Hallaway in both of his identities without anyone making any sort of connection). He also had a special arrow he called the "Spider's Seal", which had a flat disc on the end he shot at thugs' hands to disarm them.

Only one adventure of the Spider has ever been reprinted by DC Comics (which acquired the Quality Comics stable of characters when the company went out of business in 1956), the story from Crack Comics #25, which saw print in Detective Comics #441.

The Spider later showed up a few times in the pages of All-Star Squadron and The Young All-Stars, though only in a cameo role. As a Quality Comics character, he was one of the heroes who went with Uncle Sam to protect Earth-X during World War II, becoming part of the Freedom Fighters. This was the fulfillment of a storyline that began in Justice League of America #107 - 108, which introduced most of the Quality Comics' characters to the DC Universe (previously only Plastic Man and Blackhawk had been used). - wikipeida

I like this comics series Alias The Spider. You have mentioned excellent information and pictures. Nice blog. Keep it up!

Glad to see my copy of Crack 6 is getting around!
The cover is different but the missing parts indicate it was the issue I bought at HeroesCon and had a friend scan for me.
Not a bad way to spend 5 bucks!
-Chris-

That was $5 well spent I would say!