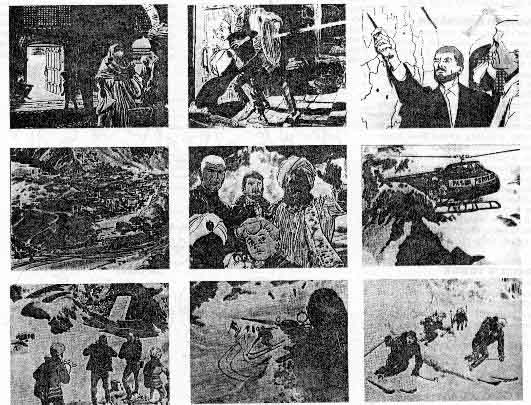 A storyboard is a visual representation of the script. In animation, it allows us to visualize an animated project in order to plan certain steps (for example the timing, or the animation).

The storyboard artist is given a copy of the script and a copy of all the rough designs (characters/props/locations).

From there he will illustrate the script scene by scene not unlike how a comic book is done. Although, unlike a comic book, the storyboard is not a final piece of artwork.

It is only information that is used by the later steps of an animation production. So it can be rough.... heck it SHOULD be rough. I have seen many artists waste too much time making a clean version of the board that they barely could devote any time to plan and properly stage their scenes.

The storyboard artist will have to pay close attention to things like the staging/composition of a scene. Better a rough board with good staging then a clean board with poor staging.

Once the storyboard artist is done drawing the board.... like the design steps, it has to go through the approval process. So everyone (directors/producers/broadcasters/etc) will want to give their comments on the board.

Once that is done, there is a department that finalizes the storyboard based on the comments of the various directors/producers/broadcasters/etc. That is where essentially all the final decisions concerning the storyboards, and the episode itself, will be taken.

It is the deciders ;) (what I am currently doing on Arthur).

Essentially we take the teams comments and decide which comments we follow to change and improve the storyboard... and which to ignore.

We move the dialogues around from scene to scene as needed.

We fix some of the poses for various reasons (one day, I must have fixed Arthur's head about 200 times..... I was getting sick of redrawing Arthur's head by the end of the day).

Sometimes, there are so many revisions that it feels like we are redrawing the whole board.

Also we look closely at the continuity. Sometimes a change that is made to one scene will affect a truckload of scenes following it. So we must change those as well.

It will also allow us to see if some designs are missing. When we do, we let the designers know what is missing to make sure that they will add the missing designs to the model pack. Or if they need to adapt some of the designs because they might have been changed in the board.

Normally, the designers should know when some designs are missing or were changed from when they analyse the storyboard, but we tell them anyway in case they may have missed something.

Once the corrections are done, we have the FINAL version of the storyboard.

Essentially, it is the road map that everyone in the production will follow to reach their objectives.

The designers will use it to finalize their designs.

The director/sheet directors will use it to work out the timing.

The layout & posing team will use it to do draw the backgrounds and do some key poses of any element that will move in a scene.

And the animators and their assistants will use it to plan the animation step and keep track of the continuity of an episode.

So... many people will need the storyboard to do their job.

It is essentially an illustrated version of the script. It becomes the director's "directions" to the whole crew working on the project.

Everyone will try to follow the directives of the board in order to do their job.

It seems to me, you are mistaken [url=http://cgi3.ebay.fr/eBayISAPI.dll?ViewUserPage&userid=acheter_levitra_ici_1euro&achat-levitra]acheter levitra en ligne[/url] Whom can I ask?

Could not find a suitable section so I written here, how to become a moderator for your forum, that need for this?