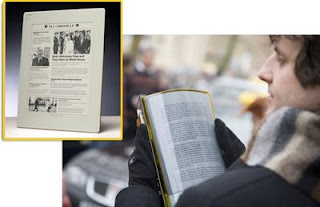 Before we begin this installment of Paper Comic DeathWatch, I'd like to mention that Wednesday was the official one year anniversary of this blog. I want to thank everyone who follows the blog for the comments and linking to it. I also want to especially thank Pierre who's Wednesday columns have really been a nice addition.

Now, on the the DeathWatch...

Monday a company called Plastic Logic unveiled a revolutionary new eReader which not only looks to be a Kindle Killer but could be quite a boon for the business world as well. Check out this demo...

No price yet - so at this stage it's hard to say just what effect this will have on print media. No color, so I don't see it cutting into the comics market anytime soon. Also no internet access like the Kindles, but I bet that's coming.

On the flipside - looking at the excitement this seems to be building, and thinking how it's wisely targeted Businesses with support of Word and PowerPoint, I don't think it's hard to see a color version getting to us eventually.

Special thanks to Caine for pointing this out to me!

The Return of MicroPayments

It's been a long time (or at least the year 2000 seems like a long time) since Scott McCloud's Reinventing Comics popularized the idea of using micropayments to pay for webcomics.

For those of you who have not read his book or heard of the term, micropayments are like when you pay $5.00 for 20 credits at a website that can be used to buy different items at that website. iStock.com is a great example of a thriving micropayments website.

Well this week, Newsarama detailed how far micropayments have come since they were first envisioned...

Micropayments have been one of the Internet's most-hyped and least-successful ideas — until now, as virtual world creators and video game companies are beginning to expect, and even depend on, players to buy virtual goods in little chunks.

Currently, micropayments are prevalent in the online/mmrpg world, but as people become more used to the idea, I can see them eventually being used to pay for installments of your favorite webcomic. Most likely as bite sizes chunks that you read on your phone or Mobile Internet Device.

That's all for this week (I'm still in Pittsburgh at a conference, so forgive the shorter post this week.)

ATTENTION COMIC PUBLISHERS: Start making comics that are DESIGNED for Black & White / Greyscale because the first version of the PLASTIC LOGIC will be BW and I'm sure the color version will be another 100.00. Can't Wait!

You know Caine - that's actually a very good point...I bet we will see a ton of Manga hitting this format because a lot of it is already in b/w...

Given the Kindle's deliberate inability to interface with PCs and allow you to shuffle documents on and off its hard drive, I think it will appeal to a crowd that doesn't want to think of it as a "computer." It's really being marketed as more of a throwback to the old idea of an electronic book, and I think it can carve out a unique niche as such.

The Plastic Logics reader looks (and acts) more like a specialized tablet PC geared toward reading books, magazines and comics. Personally, I think it's a mistake rolling this out in a black-and-white version. While the Kindle can make do without color, this doohickey is all about style and presentation (8.5" x 11", thin-is-in design, a focus on graphics-heavy pages in the demo rather than text), and color is a vital part of that in today's world. Early adopters of tech geeks with money to spare are the target audience for this rascal, so why not spring for a color display, I wonder? Could it be an overwhelming drive to make it as thing as humanly possible? (Which, of course, makes it far less sturdy-seeming than the Kindle, which is designed to be carried around in backpacks and purses.)

Typos aside, I mean to scratch my head over its thin-ness, not its thing-ness.

@Secret-HQ
..Personally, I think it's a mistake rolling this out in a black-and-white version...

I agree - lack of color and no web surfing feel like the sort of things that will make this the 1st generation type of device people talk about years from now, but no one really ever bought. I remember when the Creative Nomad Jukebox mp3 player was first introduced - there were some early adopters, but it was still something more people referenced in articles about Napster rather than actually owned. It wasn't until Apple made a *real* mp3 player that mp3 players caught fire amongst the consumers.

Interesting comparison. I guess I can appreciate it more as a proof-of-concept device that Plastic Logics is making available to the public on the off-chance they'll recoup a few dollars. Let's just hope it makes it to the real 1.0 version. :)