Revisiting the Wild Wild West: The Night of the Raven 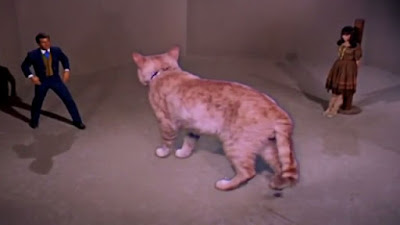 "The Night of the Raven"
Written by Edward Di Lorenzo
Directed by Irving Moore
Synopsis: Agents West and Gordon are engaged to rescue an Indian Chief's abducted daughter before the Indians retaliate. The agents learn that the kidnapping is part of another diabolical scheme at conquest by Dr. Loveless, which also involves a shrinking formula.
Trey: Because of the title of this episode, I always have a hard time remembering which one it is until it starts.
Jim:  "The Night of the Tiny Town" would have been  a better title of the episode.
Trey: And silly enough to reflect its substance! Because this is in many ways a very silly episode. As silly as "The Golden Cobra," but more enjoyable. It possesses a similar Batman tv show "high camp" quality from Loveless showing up dressed in a cowboy outfit, to the faux tranquil Indian village set-up within the house, and of course, the whole shrinking thing.
Jim: It is a bit silly in places, but I did like the playful bit where Jim and Artie give Loveless advice on how to wear his cowboy hat.
Trey: Our heroes really do have a bit of fun at Loveless's expense this episode. That part was good, but my favorite is the dinner where Loveless reveals his plan and  the shrunken West just flatly says "It won't work."
Jim: That whole scene is hilarious! "Night of the Bad Motivational Speaker."
Trey: Yeah, people sometimes complain about Conrad's flat delivery, but this scene it just really comes off as he is just weary of Loveless and his antics.
Speaking of "shrunken," we had a super-speed formula before, but that episode tried to convince you of it's plausibility. This one just assumes you will go with it. In fact, it contradicts its own previous, thin veneer of rationalization. Antionette is said to have sewn their tiny clothes, but when they are enlarged, their clothes enlarge with them!
Jim: Yeah, I wonder why they even brought attention to it?
Trey: The shrunken people sets and special effects are quite good for television of the era, though. Land of the Giants was still was 2 years away, so this episode may have been pioneering for TV. 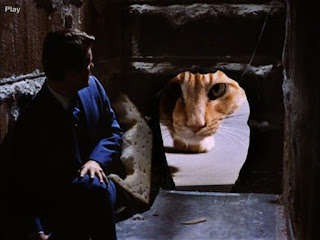 Jim: I did like the addition of the Indian Princess Wanakee, too. It was refreshing to see her pushback with James.
Trey: She is certainly atypical of female guest stars, though not unprecedented.
It feels like they have to pad the length of this one a bit to keep costs down, maybe due to all the special effects. We've got two scenes of Loveless cackling evilly and pointing out "this serum is the key to saving West. He only needs one drop, but I won't give it to him!" Which is probably two scenes more than we need to establish the existence of an antidote.
Also, This is perhaps the least detailed of Loveless' plans (and that's saying something). How is one Indian tribe on the rampage going to bring about the end of civilization exactly? Does he plan to use his shrinking formula to aid this? If so, what's his plan to distribute it?
Jim: I think at this point in the show, the writers felt comfortable with handwaving the greater threat because they felt the tone and focus of the show had changed.
Trey: That's probably true. I can hear them in the voice of Robert Conrad saying: "Look, Loveless has another crazy plan. Don't worry about the details because it won't work."
Posted by Trey at 7:00 AM