I recently introduced readers to The Steel Ring, a prose novel featuring many of the characters from the Centaur Universe written by R.A. Jones and edited by Jeff Deischer of Westerntainment. As it would so happen, Jeff saw the interview and contacted me. He was kind enough to provide me with this excellent interview which introduces us to his series of Public Domain Superhero novels under The Golden Age banner. 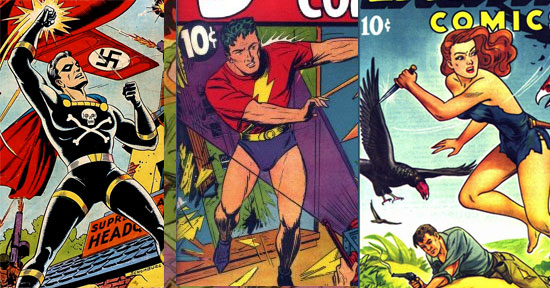 FBU: Jeff, how would you introduce yourself to the readers of the Flashback Universe? 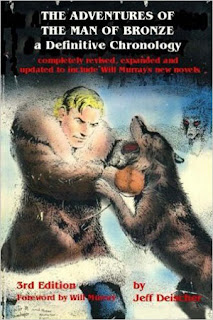 Adventure fiction made a lasting impression on my creative view as a child, and everything I write has Good Guys and Bad Guys – in capital letters. As an adult writer, I try to make my characters human, as well.

I primarily write fiction, and, combining my twin loves of superheroes and pulp, began THE GOLDEN AGE series in 2012. This resurrected, revamped and revitalized the largely forgotten characters of Ned Pines’ Standard, Better and Nedor publishing companies.

These characters, drawn from superhero, pulp and mystic milieus, fill the “Auric Universe”, as I call it.

FBU: Why you enjoy working with Golden Age characters? 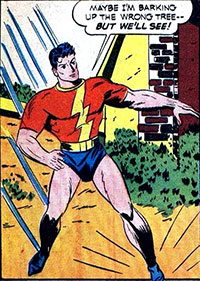 With the characters already created and possessing backgrounds (and foes), it provides a great base to start from. Ideas just start flowing. That’s true of any “resurrection” of old characters (at least for me). I specifically wanted to try golden age superheroes because superheroes are my first love, and I thought that they’d work really well with my style, which is pulpish. They’re not far removed from the pulp era, and really, they’re the next step in pulp – visual, long on action and short on characterization.

I looked through the various defunct comic book companies and saw that Ned Pines’ companies (Standard, Better and Nedor) had the most characters. That gave me a lot to work with, which fit into my plan of introducing an entire universe of characters in the book – which turned out to the first in a series. I also didn’t want to use characters that other writers were using, like R. A. Jones and the Centaur THE PROTECTORS. It wasn’t until I’d finished the first volume, The Golden Age, that a friend of mine said, “You know, Alan Moore’s using some of these characters. Tom Strong is Doc Strange.”

D’oh! I found that he’d used very few characters and had altered them even more than me!


FBU: What new things have you brought to the characters

Jeff: Anyone who’s read golden age comics knows that the characters don’t have much personality, so that was my primary goal – giving the characters personality. This included detailed origins for them (which many didn’t have). I also did some revision to make the Auric Universe a more cohesive whole, altering a few names and such. Mostly, readers have liked this, though a few think I went too far in a couple of cases. That’s one reason I call it my Auric Universe – Ned Pines’ universe is still there, exactly as fans remember and want it. That said, I did as little revising as possible. Some of this was due to my lack of knowledge about the characters, relying on a couple of internet sources. I was over halfway through the first volume when I discovered online archives, and later books reflect my greater knowledge of the characters as I worked my way through the stories. I started to use more villains from the actual comic books in later volumes, and they are much more “comic booky” as a result (from Dark of the Moon on).

Here is a list of the books in the series so far:


Included in each volume are End Notes, which describe the factual or historical basis for things in the story, as well as a documentation of the changes I made in original story or characters. There is also a timeline of events of the book, and a lexicon of characters used, as well as an Afterword.

My webpage is jeffdeischer.blogspot.com, where I post the first chapters of the first novel of each of my series, so that potential readers can peruse my work without having to spend several dollars on a trade paperback to find out if they like it or not. The publisher’s website is westerntainment.blogspot.com.