Today, I am posting the final installment of my look at the Top 20 Bronze Age Superhero Comic Runs, starting with number 5: 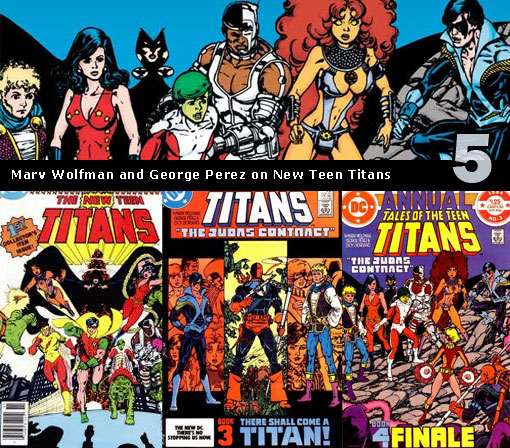 After several clumsy attempts to copy the Marvel style, DC finally had a book with the type of characterization and banter that fans at that time were clamoring for. While the rest of the DC Universe seemed sort of stuck in stasis, Marv Wolfman introduced characters and concepts that most got fandom talking about DC again. Some of the legendary arcs and characters from this run include:
George Perez, who had been a rising star at Marvel, became a true superstar on this book. His pages and designs fostered a rabid fanbase that helped create the concept of comic convention headliner. What's interesting is that at the time, The Teen Titans were nearly as popular as the X-men. Now, despite several cartoon series, DC just doesn't seem to be able to make the book work. I almost think they need to steal Brian Bendis' idea of bringing the Silver Age X-men into the modern era with the Teen Titans. There was something about that classic lineup that pale analogues of the modern era are missing.
04: Kirby's 4th World

It might seem a bit unfair to include three separate titles as one entry, but since Jack was interweaving the storylines so closely, I count his Fourth World titles as one big run. I don't think I can adequately encapsulate the brilliance of Jack's Fourth World comics, so I'll present this video documentary on the King:

I have one thing to add: I remember the first time I saw a Kirby Fourth World Comics. It was issue 9, which featured Forager. My friend Jim Triplett had it at his house and I read it while on a sleep over back in 1972. Jim had a stack of comics, many of which I wasn't familiar with, but the New Gods was the one I picked up to read while he slept in on Saturday morning (I've always been an early riser).
I remember reading the first couple of pages and just being awestruck at the richness of the world and characters. I think this may have been my second actual encounter with Kirby's artwork (the first being Fantastic Four 92 which was one of my first five comics) and I could tell he was on a completely different plane than the artists who drew most of my favorite comics (Dick Dillin, Ross Andru, Jim Aparo, John Buscema) Looking back on this event now, I realize that my local newstand most likely was not carrying the Kirby Fourth World books as I don't recall ever seeing any of them anywhere but in house ads. When Mister Miracle or The Demon showed up in Batman Brave and the Bold, I recognized them as being by Kirby, but I always wondered why their own titles weren't on the racks.
No link to a collected edition on this one because I kind of think the DC 4th World Omnibuses have sucky paper and bad bindings and I'm not alone on this. 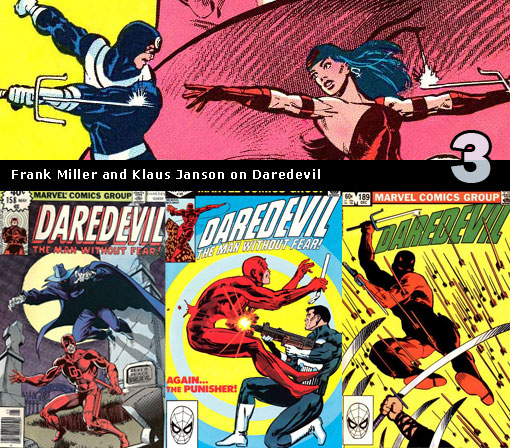 The first (acknolwedge) artist as storyteller comic at Marvel. Miller redefined the genre with his grim and gritty storytelling and lean artistic style. As a kid, I had actually bought 158, Miller's first issue on the title, and thought it was pretty ho-hum, but as he continued on the series, he loosened up on his line work. By the time I tried another issue (171) Miller's style had evolved into an almost Alex Tothian simplicity. What really struck me though was how Miller was telling the story. The panel work felt like movie storyboards with an experienced noir director calling the shots on the setup. It's no wonder this run is a favorite among folks in Hollywood. 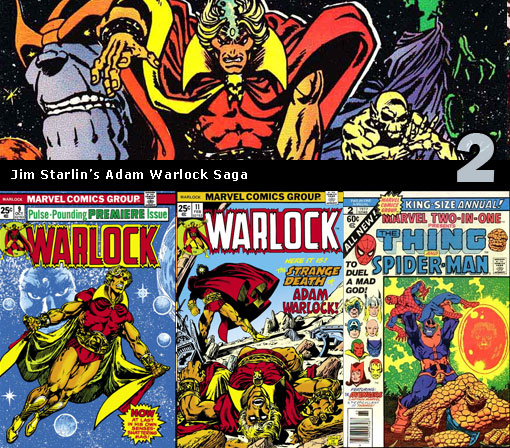 While he turned out some fine work on Captain Marvel, this is the comic that Jim Starlin is most associated with - and for good reason. It's easy to see that this became a very personal book for Starlin as the stories often tackled unusual topics for comics books (the questionable authority of the Church being the most prominent.) Looking back, it's almost hard to believe that Marvel gave this series to time to unfold. Especially since I suspect it only came out bimonthly (check this) still the editors must have realized Starlin was working on something great here.
I'm putting this over Miller Daredevil run for two reasons. 1) It's shorter and as a result delivers more impact because of that. 2) It covers more ground thematically. 3) The characters introduced, especially Thanos have become more influential in Marvel over the years whereas many of Miller's characters, with the exception of Bullseye, have completely disappeared.
01: Uncanny X-men 108-109, 111-143 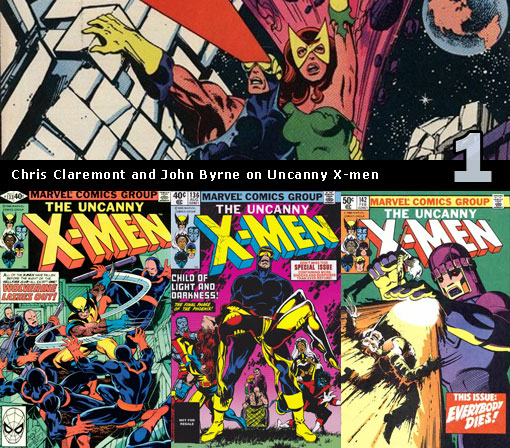 In many ways, this run was the end of the Bronze Age in my opinion. In it we saw the rise of the hero as killer with Wolverine, the beginning of the X-men dynasty, longer, more complicated storylines and the first death to rock the industry since, what? Gwen Stacy? Byrne was turning out incredible artwork and Claremont brought a whole new level of pathos to the old mutant gang. This run was so popular that it was picked by the readers of ComicBookResources as THE number one comics run of all time.
In many ways, this series rewrote the book on what superhero comics should be like. After this, both DC and Marvel would put out a multitude of team books. DC scored a hit with New Teen Titans. Marvel found gold in X-men spinoffs. One has to wonder, would this current era of superteam spin off comics exist without the massive success of the X-men series?
Well, that's my Top 20. What do you think? Is there an arc you would have liked to seen rated higher? Did I forget one of your favorites. Let me know in the comments section.
- Jim
Posted by Jim Shelley at 7:29 AM

TEEN TITANS
I don't think I'd ever collected a team book before. My discovery of the Teen Titans was very organic through Batman >> Robin >> Nightwing >> Titans >> Then back issues.

I had to have them all. I didn't grow up reading The Fantastic Four, The Justice League, or The Avengers like most kids so team books were new and when I picked up Titans I could feel that not only was it new for me but this book was new for everyone. Raven, Cyborg, Starfire and Jericho were all so unique that they changed everything, at least for a while.

I hadn't experienced anything like it then or since.

DAREDEVIL
What's interesting is that I think it was the 'jump line' built into his cane/escrima sticks that drew me to Daredevil. I saw a shot of him swinging through the city and immediately recognized that as Batman's schtick. What? A Marvel hero running solo (and doing it swinging through the skyline no less) through the streets fighting crime like a DC vigilante? I had to read that book and with Miller's epic love story told on the roof tops of New York I was hooked.

Like Titans no one was doing this anywhere else in any other book. Electra was beautiful and could hold her own with or against Daredevil. Bullseye (although kind of a one trick pony) was menacing and actually killed a star of the book pretty early on in the run.

Then there was Matt Murdock, his law practice, Kingpin, and all the complex personal issues that came with being blind and having a prominent secret identity.

You should clarify a few things in your post. Bullseye was not introduced by Miller. He was around almost 30 issues before Miller came to the scene. Same with Thanos. He was created by Starlin, but was introduced in the pages of Iron Man. Your wording implies they both were products of the runs you site.
Great otherwise.

Hilarious rankings. Any plans to post them in the correct order sometime?