Today I continue my series of Lost 100 Page Super Spectaculars with this entry featuring a Green Lantern themed issue: 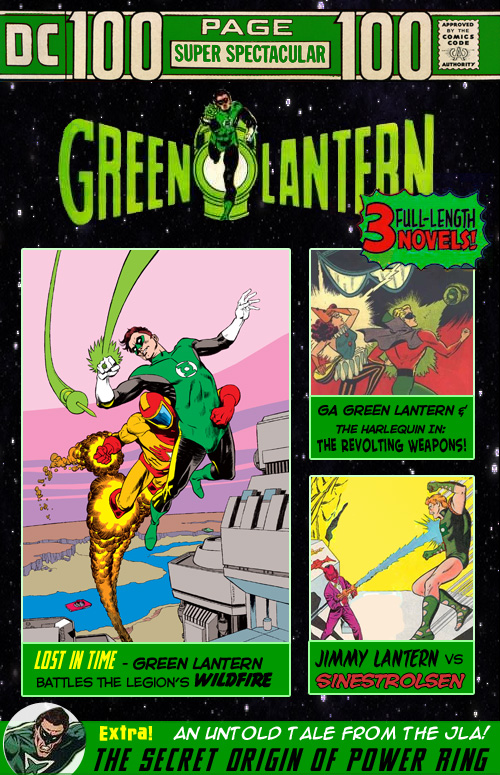 The Green Lantern vs Wildfire illustration comes from the very talented Adam Moore who is known as Laemeur on deviantArt.com. You can see more of his artwork on his website:  http://laemeur.com/

Adam actually sent me two versions of the illustration above. The second one was one where he had used some photoshop filters to give the artwork a cool retro effect. You can see it below. (Click to enlarge for more detail) 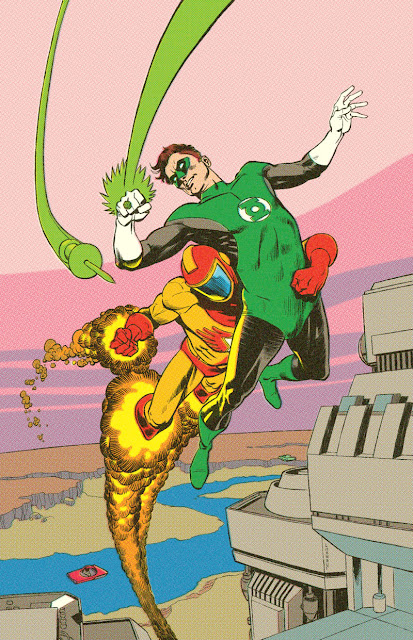 Not sure if you guys are really digging these Lost 100 Pagers or not (they don't seem to elicit many comments) but I'm digging creating them. With this one, I took the liberty to mock up the Jimmy Olsen image to create neat little Green Lantern themed Olsen story.

In looking up covers to use for this 100 Pager, I was struck by the fact that Green Lantern never got his own 100 Page Super Spectacular. About as close as he got was the 52 pager. below. 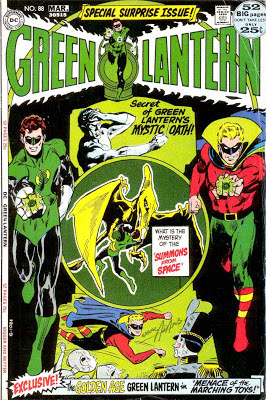 As far as I can tell, Green Lantern seems to have been in a bit on the backburner during this time period. It was before Mike Grell started his Green Lantern/Green Arrow series and some time after Jordan's Silver Age heyday.

Outside of the recent Geoff John's era of Green Lantern, he's never been a huge pull on a title. Wonder Woman and The Flash actually have a longer unbroken run than GL. (And I would suspect more name recognition among the general populace due to television shows based off the characters.) This raises the question: Why did Warner Bros decide to spend 200 million dollars making a Green Lantern movie? Why GL and not Wonder Woman or The Flash?

The lack of wider name brand recognition might have been a huge factor in the dismal Green Lantern movie opening weekend.

"Why did Warner Bros decide to spend 200 million dollars making a Green Lantern movie? Why GL and not Wonder Woman or The Flash?"

I though that was odd to. Maybe the 3 Stooges (Didio, Johns, Lee) convinced the studio that was the way to go based purely on the idea that a cocky Hal Jordan would be the closest thing DC has to Tony Stark.

Nice art!Wildfire was always one of the best designed LSHer during this period. Could it be that in this encounter GL is in his Pol Manning persona? :)

I remember that GL wasn't very popular during this era, too. He used to be a back-up on The Flash. I never really got into GL until Kyle Rayner entered the picture. I think it's because I found Hal (and also Barry Allen) to be very boring, personality-wise.

At the point of Green Lantern #88, the legendary Denny O'Neil/Neal Adams series was nearing it's conclusion.
(#88 was a reprint issue to give the notoriously-slow Adams time to finish what became the final issue, #89)
Several months later, GL/GA (still by O'Neil/Adams) became the backup strip in The Flash (as of #217).
After three chapters, Green Arrow left for a backup in Action Comics, and Neal Adams left GL, which continued until #246, at which point the GL/GA title was revived at #90, with Mike Grell as artist.

@MattComix - I think you nailed it! I can totally see that train of thought going on in some Hollywood conference room. Too bad they didn't think to go with a Wally West Flash.

@Trey - Yeah, I think the green push pin coming up from behind WildFire is an especially inspired touch.

@Reno - I'm going to have to google Pol Manning.

@BrittReid - thank you the excellent information about that era of Green Lantern. After I posted the cover, I remembered the old Flash backup series (with Truck Driving Hal! I think he had an alcohol problem during this time too, iirc.)

@Ed - Thank you for the compliment. I really enjoy working on these covers.

I'm a fan from Green Lantern, specially from the 70's and 80's, and this kind of art give some hope and dreams about this spectacular character.
Thanks man.
Alex - Rio Grande, RS, Brasil.