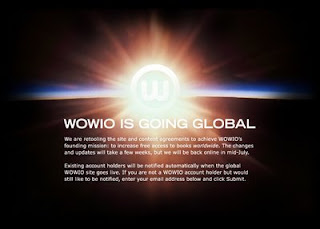 What's up with Wowio?
That seems to be a question making it's way around the internet this week.

For those of you just joining us (or perhaps not as knowledgeable of the Digital Comics scene as say, a 14 year boy in the Phillipines) let me answer the question of What is Wowio with this text I appropriated from their FaceBook page...

WOWIO is the only source where readers can legally download high-quality copyrighted ebooks from leading publishers for free.

Readers have access to a wide range of offerings, including works of classic literature, college textbooks, comic books, and popular fiction and non-fiction titles. Mission: Our business goal is to build a company that creates valued relationships between readers, sponsors, and book publishers.

For the larger community, our goal is to dramatically expand access to written works by eliminating economic, geographic, and logistical barriers while also ensuring fair compensation for publishers.

Wowio is similar to Flashback Universe in that all the content on their site is FREE. (And for that reason, I have toyed with the idea of actually moving my content to their site several times...)

The biggest difference is they present their comics in PDF format.

My personal belief is that PDF is a really bad way to distribute Digital Comics. I prefer CBR format.

However, I fully understand why Wowio has chosen this format (I've had several long discussions with representatives from that site about this. ) It boils down to this: PDF format has several built in technological advantages over CBR format that make monetizing the content on the site much easier.

And monetizing content does sound like a worthy cause - especially if the readers still get their comics for free.

Check out what some of these creators are saying they've made off of Wowio...

Steve Horton of Smashout Studios
I’ve been on the site since April 2007, and my company has made almost $28,000 since then, most of which goes straight to the creators I publish.

Chris Cosby of KeenSpot (and other ventures)
I’ve posted WOWIO revenue numbers publicly before for my companies (Blatant Comics/Keenspot), so I have no problem with giving an update on that. Since last August we’ve made $93,624.50 from 186,736 WOWIO downloads.

Bill Williams of LoneStar Press
...I started out on WOWIO in November last year. Since then, we have cleared about $10K on 15,000 free downloads. The best performer over time has been Bill Willingham’s PANTHEON script book. The best performer this quarter was SideChicks #1 which compiles my webcomic of the same name which runs on Graphic Smash.com. That material is what the Zuda books will look like when they ever hit print.
WOWIO far out-performs sites like Drive Thru Comics which is a pay-per-download site. I think that WOWIO has proven that giving away ad-supported books works better as a business model than the pay per download sites.

Those number are pretty impressive!

I think things are can only improve for Wowio if they really go global!

So would I ever consider putting Flashback Universe material on Wowio?
Definite maybe.

Based on my current poll, there are quite a few people who read comics in PDF format. If moving to that format allowed me and Pierre (and all the other Flashback creators...) to continue doing what we love to do, but get paid more for it, I would almost have to do it.

Still, as a purist, I probably would continue to publish some comics in CBR format. The idea I'm currently toying with is to create a new line of comics for other venues (Zuda, Wowio, etc) and continue the Flashback Universe as a CBR only site.

I would be happy to hear what other people think about all this.

Why not both formats?

You mean both formats for the same comic? Wowio doesn't allow such double posting of content. :\

I had the same thought as philip. Based on the reply, I have a question. Does Wowio require sole distribution? Just because you'd have to publish to pdf for Wowio shouldn't mean that you can't also publish to cbr or cbz on any other site, unless there is such an exclusivity clause.

I don't like pdfs as well as cbr or cbz, and it has almost entirely to do with the software and the reading environment it creates. PDF was created as a format to control layout (and include DRM restrictions on how people could use the content). It's not really meant for reading -- it's meant so that everyone has the exact same document laid out exactly the same. Cbr and cbz readers, on the other hand, are all very flexible in terms of how you want to configure them.

but in the long run, I'd like to see the content. if pdf means the creators can see some payment, I'll take the pdfs.

Maybe you should try posting one of your more popular comics as a test, such as the League of Monsters. Then you could decide based on the results. Personally, I don't have a preference between pdfs and cbrs. Neither would be my first choice, but I'd accept either of them without complaint.

Yeah - I kind of meant, why not continue to publish the cbr format on your site, but put a PDF version on Wowio?