Revisiting the Wild Wild West: The Night of the Flying Pie Plate 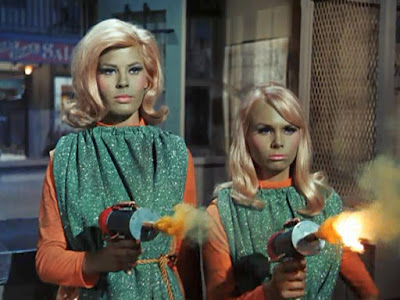 "The Night of the Flying Pie Plate"
Written by Dan Ullman
Directed by Robert Sparr
Synopsis: While protecting a shipment of gold awaiting transport in an Arizona town, West sees a flaming light in the sky and hears a loud crash. When they investigate, West and the townspeople discover a strange saucer shape structure, and three green-skinned women who claim to be from the planet Venus. They need a certain substance--gold--to repair their craft and are willing to trade precious gems for it.
Trey: I remember when I first saw this episode. I don't know how much of the series I had seen at that point, but I didn't like this one for a couple of reasons. One, I found the "flying pie plate" idea ahistorical and a bit of nudge-wink camp of the sort common to Brisco County, Jr., that ran against my conception of WWW. Why not a phantom airship or some Jules Vernes inspired tech? Second, I found it too fanciful. I could concede some Steampunk tech and Victorian Bond gear, but fake aliens was just too much!
Now that I have seen more WWW, I am perhaps better able to put it into context, and it doesn't seem as out of place as it did then. I still think a more Victorian space conveyance would have been more fun, but it sits well enough with WWW overall.
Jim: The space ship gave me pause, too. It feels anachronistic. I don't know if it makes the best "oddity" to scam a small western town with, either. A witch or ghost probably would've been more fitting. This feels like an editorial mandate of some sort. I will say the Venusians costumes make good use of the color television.
Trey: You desperately want a supernatural-themed, Wild Wild West, we've established. Last episode was just a tease!
Jim: Blame it on too much Kolchak.
Trey: In it's defense--because I like the episode now--I think Season 2 feels more polished by this point that S1. I think it started feeling that way around "Big Blast," where the stories were more complicated and the sets better realized, but "The Night of the Big Blast" had some conceptual deficits the two stories after it didn't have. Also, getting them out of San Francisco and into more Western towns, as seems to be happening, makes it feel more genre Western.
Jim: A small western town feels like a nice change to me. While the episodes in San Francisco or New Orleans might fit the spirit of the show better, as you have argued, Old Man Shelley wants to see more frontier towns and western tropes!
Trey: Yes, which is an about face for Old Man Shelley from previous episodes.
Jim: Votes are still being counted.
Trey: I see! Well, we should mention the guest stars here.
Jim: William Windom, as Ben Victor, looked super familiar to me, then I recognized him as Dr. Seth Has left from Murder, She Wrote. Looking him up I saw he has had an incredible career starting in 1949 and going until 2006!
Trey: I can honestly say I remember very little from Murder, She Wrote. But hey, we also have Leslie Parrish who was Daisy Mae in the 1959 film version of Lil Abner, but also Lt. Carolyn Palamas from the Star Trek episode "Who Mourns for Adonais?" and molls for Mr. Freeze and the Penguin in Batman. 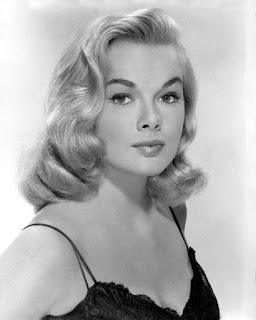 Jim: If I have a complaint about this episode, it's that the mystery is busted a bit too quickly. I think the show could've teased up the possibility of real Venusians  before acknowledging (via Jim and Artie) that the whole setup was a scam. The way they played it really undercut the entire first act.
Trey: I disagree. I feel like having West and Gordon immediately assume weird ladies from space asking for gold when they just happen to have brought a lot of gold dust into town is too much of a coincidence is a good thing. I think it both supports their canniness and the anti-paranormal stance of the series.
Jim: There's got to be a 50's b-movie named Weird Ladies from Space.
Posted by Trey at 7:00 AM